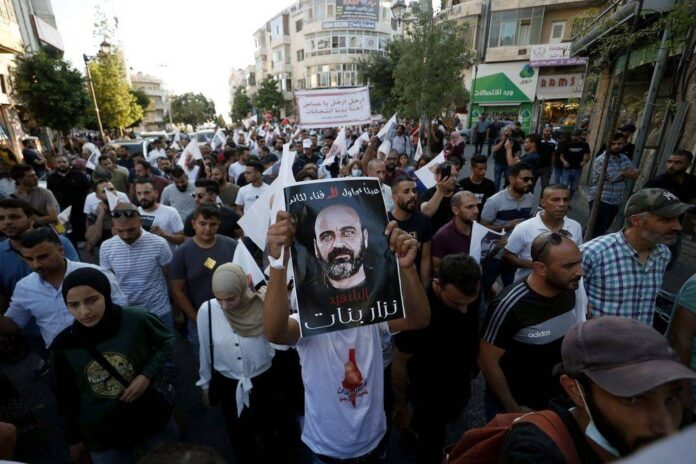 The international rights group on Thursday called on donors to cut funding to Palestinian security forces and for the International Criminal Court to investigate people involved in abuses, which it said may amount to crimes against humanity.

The report came a year after Nizar Banat, a prominent critic of Palestinian President Mahmoud Abbas, was beaten to death in custody. His death sparked days of protests in the West Bank that were violently suppressed by Palestinian security forces.

The Palestinian Authority exercises limited self-rule in parts of the West Bank, which Israel occupied in a 1967 Middle East war. The Islamist militant group Hamas rules Gaza, a coastal enclave under blockade by Israel and neighbouring Egypt.

“More than a year after beating to death Nizar Banat, the Palestinian Authority continues to arrest and torture critics and opponents,” said Omar Shakir, Israel and Palestine director at Human Rights Watch.

“Systematic abuse by the PA and Hamas forms a critical part of the repression of the Palestinian people.”

The ongoing trial of 14 security officers charged with Banat’s killing began in late 2021. They have all pleaded not guilty.

Last week, Amnesty International called the trial “flawed” and said those who gave the orders to arrest Banat must also be held accountable.

The spokesman for the PA security services, Talal Dweikat, denied the allegations of systematic abuse.

“We can arrange for human rights organisations to visit any facility that allegedly practices torture and to speak with detainees there,” he told Reuters. “For us, the dignity of the Palestinian citizen is above all.”

Dweikat added that he regularly meets with members of the security forces to make sure they comply with regulations.

A Hamas spokesperson did not immediately respond to a request for comment.

The report also outlined mistreatment and torture of Palestinians by Israeli forces, adding that of the hundreds of torture complaints filed in the past 20 years with Israel’s Justice Ministry, none resulted in indictments.

HRW’s findings on Thursday followed a 147-page report it released in 2018 detailing patterns of abuse that it said the Palestinian authorities routinely rely on to crush dissent, including use of torture.

The report, authored with the Palestinian rights group Lawyers for Justice, was submitted to the United Nations Committee Against Torture. — AFP