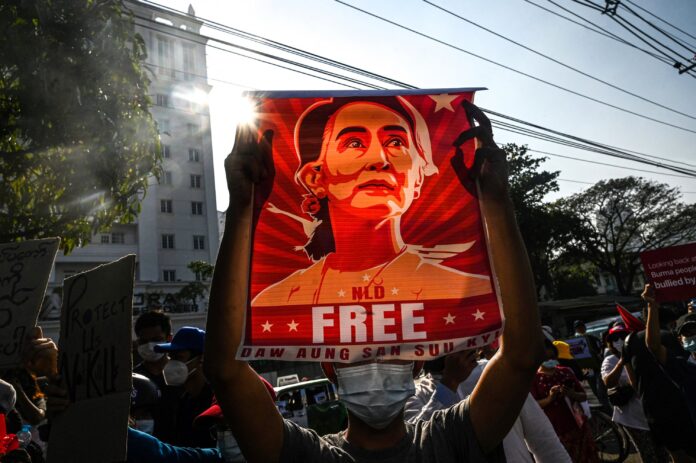 File photo taken on February 15, 2021 shows a protester holding up a poster featuring Aung San Suu Kyi during a demonstration against the military coup in front of the Central Bank of Myanmar in Yangon. – AFP photo

YANGON (June 23): Ousted Myanmar leader Aung San Suu Kyi remained in strong spirits after being transferred from house arrest to prison, a source with knowledge of the case said today, and would “calmly” face her new solitary confinement.

Since being deposed in a coup last year, Suu Kyi had been under house arrest at an undisclosed location in Naypyidaw, accompanied by several domestic staff and her dog, according to sources with knowledge of the matter.

The Nobel laureate, 77, left those premises only to attend hearings for her numerous trials in a junta court that could see her handed a prison sentence of more than 150 years.

On Wednesday, she was transferred from house arrest to “solitary confinement in prison”, junta spokesman Zaw Min Tun said in a statement.

Her future trial hearings would take place inside a courtroom within the prison compound, he added.

Suu Kyi was in “strong spirits” after the transfer, a source with knowledge of the case told AFP.

“She acts like before and is in strong spirits,” said the source, who requested anonymity. “She is used to facing any kind of situation calmly.”

A source with knowledge of the case said Suu Kyi’s domestic staff and her dog had not accompanied her when she was moved on Wednesday, and that security around the prison compound was “tighter than before”.

“Aung San Suu Kyi is in good health as far as we know,” they added, speaking on condition of anonymity.

Suu Kyi will be provided with three female staff from inside the prison to look after her, said another source with knowledge of the matter, without specifying whether they would be convicts or prison wardens.

Since seizing power, Myanmar’s military government has detained thousands of pro-democracy protesters, with many facing secret trials that rights groups have decried as politically motivated.

Suu Kyi’s lawyers have been banned from speaking to the media, with journalists barred from her trial and the junta rebuffing requests by foreign diplomats to meet her.

“For the sake of the country and people, she (Suu Kyi) has sacrificed everything, but the wicked people are ungrateful and cruel,” one social media user posted on Facebook following today’s announcement.

“What we are seeing is the Myanmar junta moving towards a much more punitive phase, towards Aung San Suu Kyi,” said Phil Robertson, deputy Asia director for Human Rights Watch.

“They are obviously trying to intimidate her and her supporters.”

In 2009, she spent around three months in Yangon’s Insein prison while she went on trial after being accused of harbouring an American man who swam across a lake to visit her while she was under house arrest.

Under the current junta, she has already been convicted of corruption, incitement against the military, breaching Covid-19 rules and breaking a telecommunications law, with a court sentencing her to 11 years so far.

Suu Kyi turned 77 on Sunday and brought a birthday cake to court to eat with her lawyers ahead of a hearing on Monday, according to a source with knowledge of the matter.

The coup last year sparked widespread protests and unrest that the military has sought to crush by force.

Fighting has flared with established ethnic rebel groups in border areas, and across the country “People’s Defence Forces” have sprung up to fight junta troops.

According to local monitoring group Assistance Association for Political Prisoners, the crackdown has left more than 2,000 civilians dead while more than 14,000 have been arrested.

Diplomatic efforts to end the crisis led by the Association of Southeast Asian Nations bloc, of which Myanmar is a member, have floundered.

Tom Andrews, the UN Special Rapporteur on the situation of human rights in Myanmar, called for the bloc to increase pressure on the junta.