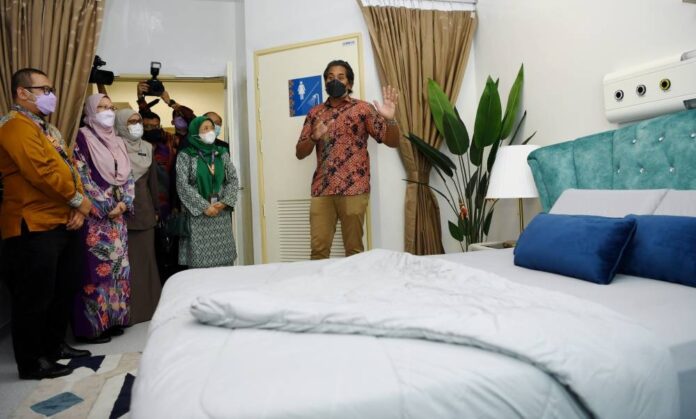 REMBAU, June 23 — The Ministry of Health (MOH) aims to establish one-stop centres (OSC) for sleep-related issues in 40 hospitals nationwide within the next five years.

Health Minister Khairy Jamaluddin said so far, such centres were only available at the Putrajaya Hospital, Serdang Hospital, Kuala Lumpur Hospital and Sultanah Bahiyah Hospital with each having a level-one sleep study lab.

“If we take into account 13 hospitals with level one (sleep lab) facilities and 27 specialist hospitals (with level three and four sleep study) it will cost RM1.5 million,” he said when addressing the opening ceremony of Otorhinolaryngology (ORL) and sleep lab services at the Rembau Hospital here today.

He said the OSC would enable multi-disciplinary treatment because Obstructive Sleep Apnea (OSA) was closely linked to various other comorbidities.

He explained that patients needed a polysomnography test or better known as a sleep study to diagnose OSA, and the main constraint faced by hospitals that have ORL services was the lack of facilities to perform sleep studies.

“For example, in Negri Sembilan, patients have to wait more than six months to undergo a sleep study test at the Serdang Hospital or Putrajaya Hospital. MOH is committed to improving this service by improving sleep laboratory facilities in all hospitals with ORL expertise,” he said.

According to him, this includes providing suitable equipment for level one polysomnography which is the best test for OSA.

Khairy explained that sleep apnea, which is a condition where a person stops breathing during sleep, is found to be getting worse with about 15 per cent to 30 per cent of people in Malaysia suffering from the problem.

“Among the main symptoms experienced by a person who is likely to suffer from sleep apnea are loud snoring and stopping breathing for a while during sleep; extreme drowsiness during the day and falling asleep while driving (microsleep).

“Most of the time sleep apnea is just considered a ‘snoring problem’, but this condition is more serious and needs immediate attention. Sleep apnea is very dangerous because it can not only cause accidents but if left untreated, can lead to chronic diseases such as high blood pressure, heart attack, heart failure and stroke,” he said.

Khairy said according to a study by the Lancet Journal of Respiratory Medicine in 2019, about 77.2 per cent of the people in the country were estimated to have low levels of OSA, compared to only 7.8 per cent of the population in Hong Kong.

Apart from that, he said the police have also reported that a total of 1,305 road deaths from 2011 to 2021 were due to accidents caused by drivers who fell asleep (microsleep) while operating their vehicles. — Bernama