HomeWorldMacau hotel locked down after Covid case, 700 people to be quarantined-media
World

Macau hotel locked down after Covid case, 700 people to be quarantined-media 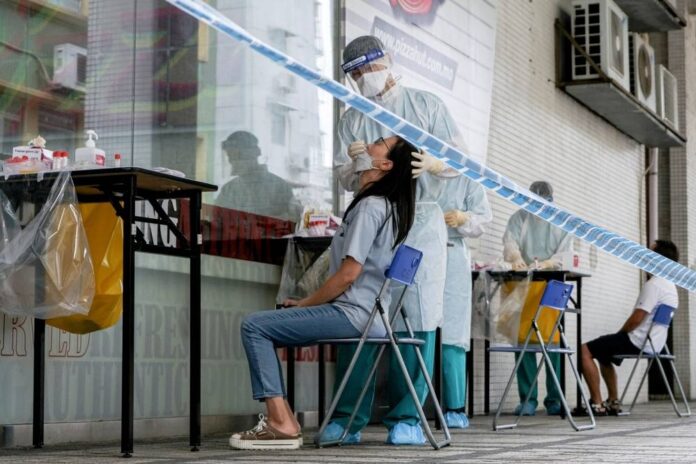 HONG KONG, June 21 – A hotel and casino resort in the world’s biggest gambling hub of Macau was locked down by authorities with 700 people inside today due to a coronavirus infection outbreak on the property, local broadcaster TDM reported.

The lockdown comes as the Chinese special administrative region carries out a two-day mass testing of its more than 600,000 population after dozens of locally transmitted coronavirus cases were discovered over the weekend.

Footage obtained by the broadcaster and industry publications showed police officers in protective gear sealing the complex to prevent people from entering or leaving. Government officials were also preparing Covid-19 tests for the hundreds of people inside.

Fortuna, an aged gaudy property located on Macau’s main peninsula, is a satellite casino under the umbrella of SJM Holdings the entity created by former Macau kingpin Stanley Ho.

Its casino was headed by local businessman Sio Tak Hong, who was arrested last year for alleged corruption and money laundering.

The hotel and the government did not immediately respond to request for comment.

Macau’s previous coronavirus outbreak was in October last year and the city has not previously had any large scale quarantine or lockdowns. Dozens of cases have emerged since the weekend but still far below daily infections in places including neighbouring Hong Kong where infections have jumped to over 1,000 in recent days.

The Chinese-ruled former Portuguese colony adheres to China’s “zero Covid” policy which aims to eradicate all outbreaks, at just about any cost, running counter to a global trend of trying to co-exist with the virus.

Most residents are asked to stay at home, restaurants are shut for dine-in and border restrictions have been tightened, meaning casino revenues are likely to be close to zero for at least a week and likely the coming weeks, analysts said.

Hong Kong’s outbreak this year saw more than 1 million confirmed infections, and more than 9,000 deaths, swamping hospitals and public services. Officials there say they are unlikely to further tighten restrictions as the pressure on medical services has not increased.

Macau only has one public hospital with its services already stretched on a daily basis. The territory’s swift plan to test its entire population comes as it keeps open the border with mainland China, with many residents living and working in next door Chinese city Zhuhai. – Reuters