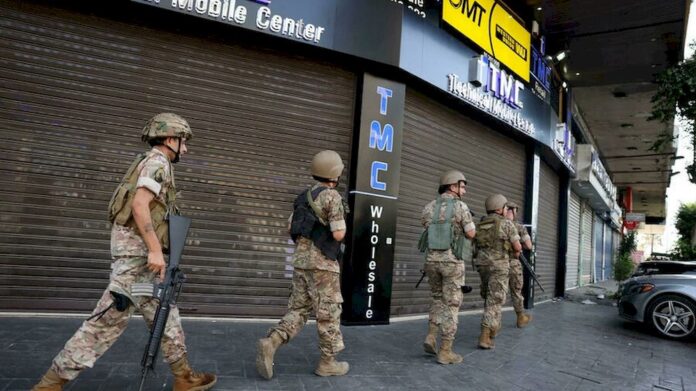 Soldiers advance in the Beirut neighbourhood of Tayouneh, during the deadliest sectarian unrest that Lebanon has seen in years. — AFP pic

BEIRUT, Oct 15 — Lebanon prepared to bury the victims of its deadliest sectarian unrest in years today after gunfire gripped central Beirut for hours and revived the ghosts of the civil war.

The Shiite movements Amal and Hezbollah that organised the protest in front the Justice Palace accused the Lebanese Forces (LF) Christian party of engineering the chaos by aiming sniper fire at the demonstrators.

The front page of the Al-Akhbar daily, which is close to Hezbollah, carried a portrait of LF leader Samir Geagea donning Adolf Hitler’s uniform and toothbrush moustache with a headline that read “No doubt”.

“Samir Geagea, you were the first to know what happened yesterday… because you planned, prepared and executed… a major crime,” the newspaper wrote.

The LF strenuously denied any involvement in Thursday’s flare-up and said Hezbollah was “invading” off-limits neighbourhoods when the violence broke out.

A heavy army presence was visible on the streets Friday amid fears of an escalation.

Yesterday, Amal and Hezbollah militiamen in their hundreds filled the streets around Tayouneh, a notorious civil war flashpoint near the spot where the April 1975 bus attack often presented as the trigger of the conflict occurred.

As a deluge of bullets riddled residential facades, and gaggles of fighters wearing ammunition vests took over the streets and emptied their magazines haphazardly, civilians crouched in homes, terrified.

When Maryam Daher, a 44-year-old mother of two, saw civilians running for safety on television, she broke down.

“It all came back to me,” she said. “At the very same moment, I received a message from my son’s school asking parents to come and collect the children.”

One of the seven people killed was a mother of five hit in the head by a stray bullet inside her home.

As preparations in southern Lebanon and in Beirut were under way for the funerals, the country marked a day of mourning declared by the presidency.

France, the United States and United Nations appealed for a de-escalation but also insisted on the need to allow the port explosion probe to continue unhindered.

Russia said today it was “extremely concerned” about the tensions and called on all sides to “show restraint”.

In addition to long-standing animosity between the LF and the Shiite groups, their feud was renewed by the fate of Tarek Bitar, the judge who has led the investigation into the August 4, 2020 port explosion.

What was one of the world’s biggest ever non-nuclear explosions and Lebanon’s worst peacetime disaster killed 215 people, wounded thousands and flattened swathes of the capital.

The investigation has not yet established who was responsible for the tonnes of ammonium nitrate which had been poorly stored at the port for years nor what exactly started the fire that detonated the fertiliser.

Hezbollah and Amal accuse Bitar of political bias in an investigation which Lebanon’s ruling elite as a whole has hampered at every turn for more than a year.

Two Amal former ministers are among the top officials Bitar has summoned for questioning.

The discreet 47-year-old judge is seen by the blast victims’ families and many others who want the wholesale removal the political elite as the country’s best chance to achieve justice and cause some kind of political shake-up.

Bitar’s entourage says the young judge is aware of the risks in a country’s whose history is littered with unpunished assassinations but remains determined to press his probe.

The latest appeals rulings on the various legal challenges launched by subpoenaed ministers currently allow Bitar to resume an investigation which was suspended multiple times.

But with the day of mourning today and a religious holiday running until Monday, Bitar’s investigation will not resume before next week.

The government headed by Prime Minister Najib Mikati and whose members are all sponsored by Lebanon’s hereditary political barons is expected to seek a solution that would allow the investigation to continue but appease Hezbollah.

The Iranian-backed group’s leader Hassan Nasrallah, whose influence on the street and in the political arena is unmatched, gave a televised speech on Monday in which he unleashed a strident attack against Bitar. — AFP