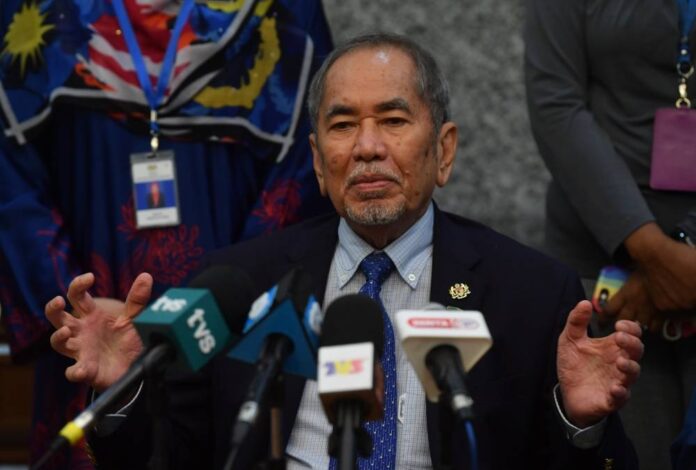 However, he said it would be made after discussions with Senior Defence Minister Datuk Seri Hishammuddin Hussein and other stakeholders on the mechanism of disclosure as there are sensitive issues which cannot be made public.

In a media conference after the Merdeka Month Celebration of the Legal Affairs Division here today, Wan Junaidi said he is of the view that sensitive matters involving security should not be revealed.

“In principle, Cabinet Ministers still emphasise that the disclosure will be made. I am of the opinion that sensitive things, security issues should not be disclosed,” he said, and added that this is also a practice in the United States and England, where sensitive issues will not be made public for security purposes.

Earlier, the Cabinet had proposed that the LCS project forensic audit report conducted in 2019 be declassified, but the process needs to get the advice and views of the attorney general and the auditor general.

Wan Junaidi also did not rule out the possibility that the government will establish a Royal Commission of Inquiry (RCI) to investigate the LCS issue.

“Prime Minister (Datuk Seri Ismail Sabri Yaakob) earlier (Cabinet meeting) mentioned one more thing (about LCS RCI). So it means that the question (LCS RCI) has not been written off, even though it is considered that the Malaysian Anti-Corruption Commission (MACC) has done its best,” he said.

Hishammuddin when winding up the debate on the motion related to the LCS issue at Dewan Negara yesterday gave his assurance that he would personally bring the LCS RCI proposal to get the approval of the Cabinet today.

Hishammuddin said this in response to the suggestions of several senators who urged the government to establish an RCI to investigate the LCS issue to examine all aspects so that no guilty party escapes prosecution.

Wan Junaidi said MACC still needs to update the investigation papers relating to the LCS case before it is returned to the Attorney General’s Chambers for a decision so that other individuals may be prosecuted.

“However, there was a discussion in the Cabinet earlier and the Cabinet’s decision was open-ended. The MACC investigation will continue and the Cabinet reiterates that we will not protect anyone in the LCS issue,” he said.

The Public Accounts Committee (PAC) previously revealed nine proceedings related to the LCS issue starting on November 18, 2020 and found that not a single LCS had been completed even though the contract for the project awarded through direct negotiation worth RM6.083 billion provided that five ships should be completed and delivered as of August 2022. — Bernama