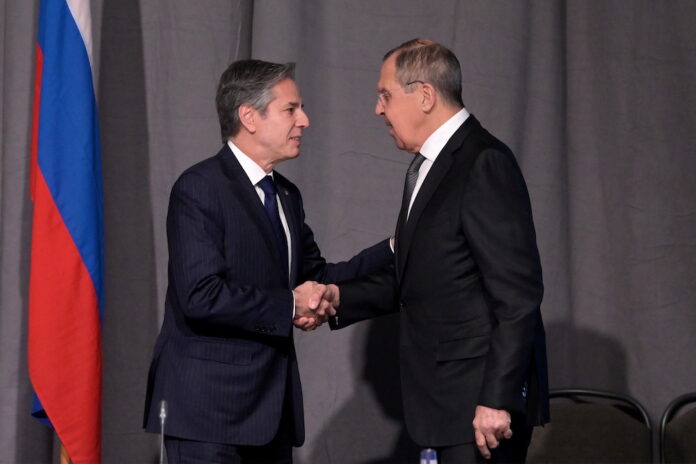 US Secretary of State Antony Blinken and Russian Foreign Minister Sergei Lavrov shake hands during a meeting of the Organisation for Security and Co-operation in Europe, Stockholm, Sweden December 2, 2021. — Pool via Reuters pic

Lavrov and Blinken were in Stockholm for a meeting of the Organisation for Security and Cooperation in Europe (OSCE), one of the few international dialogue forums to which both the United States and Russia belong.

During a bilateral meeting with Blinken, Lavrov told the US diplomatic chief Moscow wanted a legally binding promise that Ukraine would not be allowed to join Nato and that the bloc would stop its eastward expansion, Moscow said.

The top Russian diplomat warned Washington against “drawing Ukraine into the geopolitical games of the United States,” which he said “will force us to take retaliatory measures to straighten out the military-strategic balance,” the Russian foreign ministry said in a statement.

Lavrov added that Russia needed “long-term security guarantees on our western borders, which should be viewed as an imperative requirement.”

Speaking earlier in the day at the OSCE session, Lavrov said: “The time has come to transform the right words into long-term, legally binding security guarantees.”

Russia plans to present concrete proposals in the near future and expects the West to take them seriously, he added.

In recent days, Russian President Vladimir Putin has repeatedly said he wanted a concrete agreement that NATO would not expand eastwards.

Kiev and its Western allies have been sounding the alarm since last month over a fresh Russian troop buildup around Ukraine’s borders and a possible winter invasion.

Russia, which seized Crimea from Ukraine in 2014 and backs separatists fighting Kiev, has strongly denied it is plotting an attack and blames NATO for fuelling tensions. — AFP