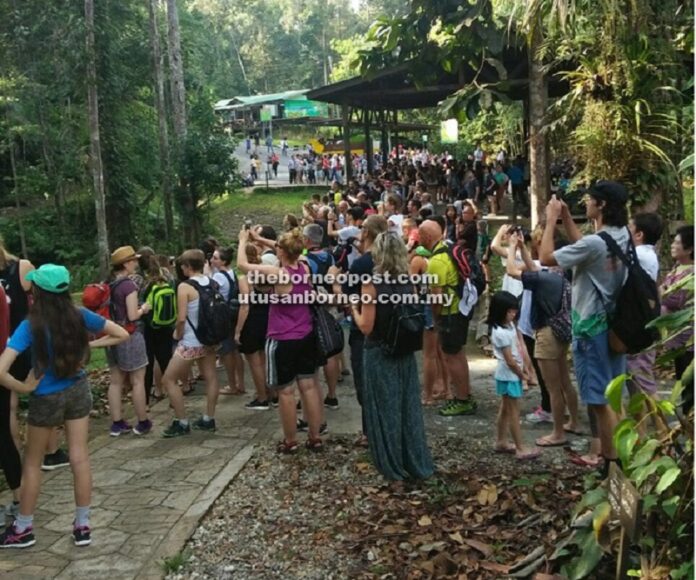 File photo shows visitors at the Semenggoh Wildlife Rehabilitation Centre, which is one of the destinations under the Jom Ke Sarawak campaign. — Borneo Post Online pic

KUCHING, Oct 16 — The Jom Ke Sarawak campaign, which began yesterday on Shopee Malaysia, offers travellers a chance to visit Sarawak through its main tourism gateways of Kuching, Sibu, and Miri.

“This campaign offers 16 exhilarating tour packages to Sarawak — exclusively on Shopee Malaysia — starting as low as RM176 for a three-day, two-night stay,” she said in her virtual welcoming speech for the launch of the campaign by Tourism, Arts and Culture Minister Dato Sri Abdul Karim Rahman Hamzah yesterday.

Sharzede said STB is very pleased to launch the much-awaited Jom Ke Sarawak campaign, which is its first interstate travel campaign after a long break, for all Malaysians and non-Malaysians residing in Peninsular Malaysia, Labuan, and Sabah.

“Jom Ke Sarawak, being STB’S first inter-state travel campaign since the Covid-19 pandemic, is hoped to be a great start to many more travel initiatives to come. We are very happy because yesterday’s launch also signifies the revitalisation of our local tourism industry and economy.

“With interstate travel now allowed as announced recently by our Honourable Prime Minister, Sarawak invites you to come over with your family and friends to visit our beautiful Land of the Hornbills and to discover our many marvels of Culture, Adventure, Nature, Food And Festivals (CANFF) here,” she said.

Sharzede said the campaign’s ‘Buy Now, Travel Later’ concept enables travellers to not only enjoy tour packages at affordable prices but also plan their travel at their convenience.

“As we transition into the endemic phase, our tourism stakeholders have been actively preparing to offer the best travel experience for our guests and ensure that all relevant standard operating procedures (SOPs) are followed.

“Be rest assured that STB and our tourism partners give priority to the safety of our visitors,” she said.

Sharzede explained that the Kuching tour packages offer travellers a feel of Sarawak’s diversity, whether it is a visit to the award-winning Sarawak Cultural Village, or a chance to get acquainted with the orang-utans at Semenggoh Wildlife Rehabilitation Centre.

“Travellers to Sibu will discover the many hidden wonders of Sarawak’s countryside in the central region, namely in Bintangor, Sarikei, Dalat, and Mukah.

“For nature and adventure lovers, the Miri tour packages will let them explore the iconic Gunung Mulu National Park, recognised as a Unesco World Heritage Site and Niah National Park, plus the opportunity to make their way to enjoy the serenity of the Bario Highlands,” she added.

The campaign is a joint collaboration between STB, Sarawak Tourism Federation, Association of Sarawak Inbound Agencies, and Shopee Malaysia.

To find out more about the campaign, visit this link. — Borneo Post Online

Facebook
Twitter
Pinterest
WhatsApp
Previous articleDuo in Sibu jailed a month, fined RM1,000 each for unlicensed possession of pangolin scales
Next articleBiden says those who refuse to testify in Jan 6 probe should be prosecuted