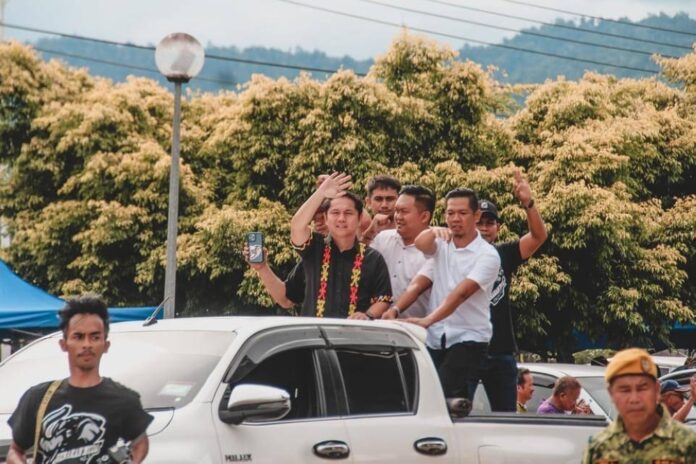 TENOM, Nov 14 — The district of Tenom in Sabah is primarily known for two things, the first being the traditional local coffee — a blend of Robusta roasted mostly by rival producers Yit Foh and Fatt Choi.

The second is the white water rapids of the Padas river. To get to the river, adventure seekers will have to take a train — the only one in Borneo — to its endpoint, passing by miles of peaceful forests, dotted with wooden houses and a school or two before you get to experience the wild ride on the grade III-IV river.

So when the quiet idyllic district saw a riot on Nomination Day after its assemblyman, Parti Kesejahteraan Demokratik Masyarakat (PKDM) president Datuk Peter Anthony, was told he could not contest due to an unresolved court conviction — it was perhaps the most action the town has seen in years.

Peter, a local hero of sorts, had been eyeing the Tenom seat as he recruited his lineup of candidates into his fledgling party. His political profile had been steadily growing over the years, especially after being appointed vice-president of Parti Warisan and serving a stint in the Malaysian Anti-Corruption Commission lockup where images of him walking in handcuffs to court clutching a Bible, went viral.

Always a big character, the former aspiring singer-turned-businessman and politician was simultaneously known for his popularity on the ground and for thuggish behaviour when crossed.

He was among the early favourites in the race due to his generosity with the grassroots and big-man-on-campus persona, but now kicked out of the running, he has still not only found a way of staying at the sidelines but has instead attempted to change the outcome of the game.

The district is the homeland of the Murut community, who were renowned for their fierce head-hunting skills in the past but eventually renounced it as they moved into modern civilisation and for the most part, replaced hunting with agriculture.

The Tenom federal constituency is one of around eight in the state categorically known as a KDM seat. KDM is the initials for the Kadazan, Dusun and Murut communities, but broadly refers to the non-Muslim-based ethnic communities.

With Peter’s exit, Noorita and Jamawi were thought to be the lead contenders, with Noorita having benefitted from opposition votes being solely in her favour.

Jamawi was Kemabong assemblyman up to 2020 and was Umno’s pick for the seat despite defecting to Warisan after the 2018 elections, before making a U-turn and joining Umno again.

It would be a two-horse race if not for Riduan, the dark horse who entered the race due to his bloodline.

His father, Datuk Rubin Balang, has made some calculated political moves in his career. Among the first to make significant political defections, Rubin was among the three who had defected from Parti Bersatu Sabah to Umno after the 1994 state elections, causing the fall of the PBS government and rise to the term “katak” or political “frogs”.

Rubin, a long-time Kemabong assemblyman, was speculated to have been eyeing the Tenom seat himself, but the seat was given to Umno to contest.

After being called out by Sabah BN chairman Datuk Bung Moktar Radin, he declared that he did not have anything to do with Riduan’s move to quit Bersatu and join the fray as an independent or Riduan’s subsequent political moves.

Riduan himself said his father had only provided moral support, and that he had come to the decision to contest as an independent on his own, quitting Bersatu and his job as a civil servant.

The heat was turned up after last Friday, Peter contacted Riduan and offered him membership in PKDM, to which he agreed. Riduan, who already possessed considerable political support, would now get the added manpower from PKDM grassroots machinery from PKDM — in all but logo as Riduan was already assigned the logo of an elephant on the ballot as an independent.

“I thought PKDM was a good choice — we have the same mission and vision. It is also a new and local party, which I gradually realise is where the sentiment is.

“They want local leaders who are not afraid to speak out and are free to work in government without being told what to do, who to support. We want a united front among local parties,” he said during the announcement of his membership.

The dark horse with the PKDM backing

As a result of Peter’s work in the background, the fight in Tenom has noticeably ratcheted up. Riduan’s popularity, on the back of him joining PKDM, is reflected in the number of crowd attending his events.

Riding in the open bed of a pickup truck flying a flag with an elephant logo emblazoned on it during a visit to Kemabong town yesterday, he was greeted by cheers from the large crowd and the beat of an array of traditional instruments including the gongs, the kulintangan and the native wooden xylophone called gabang kayu.

Both him and Peter Anthony received an equal amount of fanfare and attention from the eager crowd.

In his speech, he said he is young and eager to help the public, and thanked Peter for his guidance and offer to join PKDM. In a shot at BN, he also told Bung Moktar to not make a big fuss over his decision.

“Now I am on the right platform and I am not alone. Thanks also to STAR, PBS, SAPP and KDM, who have all helped me along the way,” he said, referring to local parties in the Gabungan Rakyat Sabah (GRS) coalition.

Peter, in his speech, said PKDM is the only “completely local” Sabah party contesting in the election and that Riduan now has the chance to “carry the Rafflesia flower” — Sabah’s unofficial flower — and PKDM’s logo, to the Parliament.

Peter ended his speech by singing a song and chants of “calon nombor tiga” — referring to Riduan’s order in the ballot — and later danced the Sumazau with the crowds.

Speaking to reporters, Riduan said he was charting his own political journey based on the past three years. He said that without proper attention, Sabah will suffer from an economic and food crisis and he wanted to bring forward his ideas.

“With PKDM now, at least there is one party we can trust to fully look after Sabah’s interests and protect its people,” he said.

He also spoke highly of Peter, saying that he had always admired his vision and leadership style, which was focused on welfare and youth development.

How traditional rivals are coping

Compared to Riduan, Noorita’s campaign seemed to take a softer approach. When met, she was sitting at a table in the corner of a hidden cafe in town, praying together with the constituents and DAP vice-chairman Teresa Kok.

A lawyer by training, Noorita was the first Murut female MP. Her struggle is to prove she can serve the public now that she is no longer allied to Peter, as she was during the 2018 elections.

Noorita said her advantage is with voters aligned to the Pakatan Harapan cause. Ostensibly, this means the minority Chinese and those in the town area. However, she insists that she is close to the ground in rural areas where she visits a lot of churches.

Tenom is divided into two state constituencies — Peter’s Melalap and Rubin’s Kemabong. Both have just over 20,000 voters, with a total of some 42,981 voters. Melalap is where Tenom town centre is, and over 5,000 Chinese voters. Kemabong, which is home to more Murut and Dusuns, has about 1,200.

Of the two, Noorita said she has been working the ground in Kemabong, the more rural of the two over the years, and will now concentrate on Melalap, which she had largely left to Peter before.

She said she is unperturbed by the drama between GRS, BN and PKDM.

“I am not surprised. Peter has been siding with GRS, and Riduan is Rubin’s son, GRS. I can see the possibilities here. I’ll just stick to my job.

“I think the factors remain the same. People know that we are choosing a prime minister in this election, not a state government. So that’s what I’m reminding people in my rallies and speeches,” she said.

Jamawi, who was Kemabong assemblyman up to 2020, when contacted said he was at first disappointed but has since gotten over his feelings of running against a former Bersatu ally and was now just working the ground with the help of other component parties.

“To me, this is democracy, we will work to win, whether with the help of the Bersatu or not,” he said, adding that he also has had help from all the BN and GRS component parties.

Jamawi said that he is familiar with both Melalap and Kemabong areas, having been on the ground and contested in both state constituencies, and felt he could do better as the first time contesting the Tenom parliamentary seat.

“We have so far covered 65 per cent of all the district voting centres and will cover the rest in the last five days. From the feedback we have, BN is leading so I think we have a good chance of recapturing the seat,” he said.

Asked what his advantage was, Jamawi said that he has been on the ground longer than his opponents.

“I’ve been an agricultural officer here since 1997 and I’ve been active in NGO work. It’s been 25 years and I’ve gotten to know the people everywhere,” he said.

He said the competition is still between the three of them but was confident of taking the lead.

Analysts and observers tend to agree that all three are neck-and-neck but Peter’s endorsement has given Riduan a boost.

“The issues they present are ok. Some might be voting for a change in the federal government and will continue to support the opposition, or in this case, not BN. But I think in the end, it will come down to the candidate’s own character and who the voters personally like.

“Peter’s influence is still apparent so Riduan will get a substantial push. Whether or not his father was involved in Riduan’s decision-making is irrelevant, they will still associate the two,” said political analyst Tony Paridi Bagang.