In Russia, abused dog found with missing paws gets new lease of life after being fitted with prosthetic legs 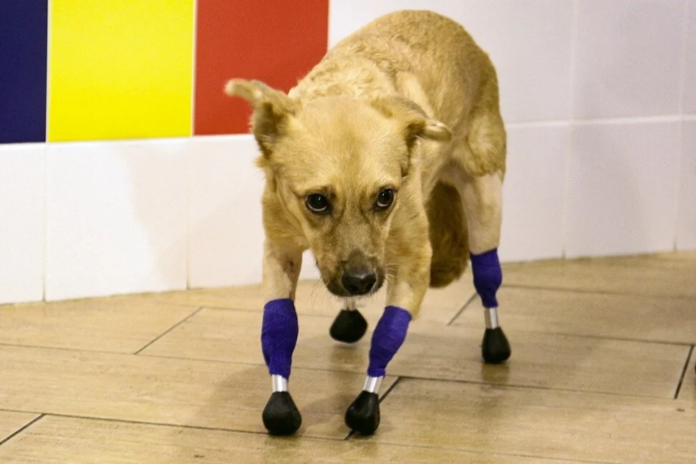 Monika, who was found with no paws, is now given a new leash of life thanks to prosthetic legs. — AFP pic

KUALA LUMPUR, Nov 29 — A dog that was supposed to be put down after being found with no paws has received a new lease of life after being fitted with titanium prosthetic legs.

Monika was found without her paws in December 2020 by workers in the village of Plastunovskaya, Russia where volunteers who rescued her suspected she had been abused, CNN reported.

She was initially cared for by volunteers Marina Gapich and Alla Leonkina, based in Krasnodar, where she had her damaged limbs amputated and received blood transfusion.

Gapich told the news channel that she and Leonkina had “sleepless nights” over Monika, and disagreed with veterinary advice to have her euthanised.

The two women then got in touch with veterinarian Sergei Gorshkov, who fitted prosthetic limbs on animals, and raised 400,000 Russian rubles (over RM22,647) for the operation.

Monika’s prosthetics were printed by a 3D printer in the town of Troitstk, not far from Moscow and then biocoated at Tomsk Polytechnic University before Gorshkov carried out the procedure.

Two weeks after her operation, Monika is adjusting well to her new mobility — and Gorshkov says she will soon be leading a normal life, although he was “surprised” by the speed of her recovery.

“I don’t think we were optimistic about that,” he reportedly said.

“But on the third day she started standing up and walking around the clinic, going from room to room.”

Monika is still recovering as Gapich and Leonkina had been in touch with a London-based animal behaviourist who might now be consulted on Monika’s case.