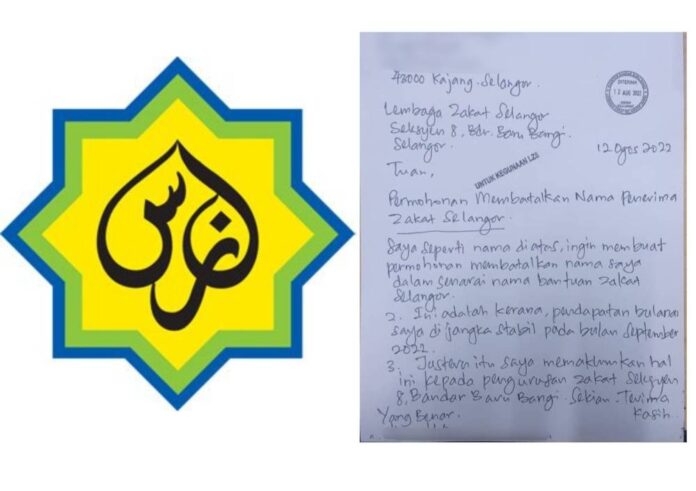 KUALA LUMPUR, Aug 17 — Lembaga Zakat Selangor (LZS) shared that they received a handwritten letter from an asnaf (underprivileged individual eligible to receive tithes), saying they now had stable income and requesting for their name to be removed from the list of zakat recipients.

“As written in the letter, I would like to request for my name to be taken off the list of Zakat Selangor’s recipients,” it read.

“This is because I’m expecting a stable income beginning September 2022.

“And because of that, I would like to inform the Seksyen 8, Bandar Baru Bangi Zakat management about this matter.” According to LZS, who shared the letter on their Facebook page, it had gotten in touch with the asnaf via a phone call to get confirmation on their living situation.

In the post, the asnaf spoke of wanting to better themselves, and with a stable income, the zakat assistance should be given to those who need it more, while expressing gratitude to those who paid their zakat.

LZS’s post which was shared yesterday has garnered over 4,000 likes and has been shared over 300 times on Facebook.

Social media users were seen applauding the former asnaf for being honest, while some were seen extending prayers and well-wishes.

“Alhamdulillah, you are an honest zakat recipient, may all of your hardships get eased in your journey,” commented user Khairul Azhar.