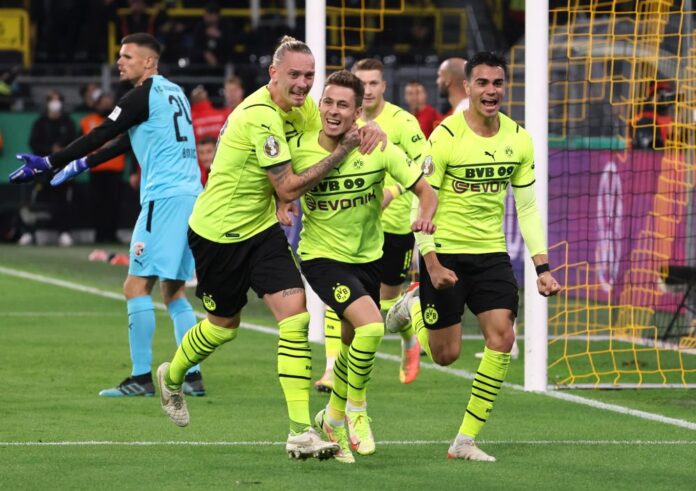 BERLIN, Oct 27 — Borussia Dortmund substitute Thorgan Hazard scored twice to guide the German Cup holders to a 2-0 home victory over Ingolstadt on Tuesday as they moved into the third round.

The Belgian broke the deadlock with a clever tap-in from a Julian Brandt pass in the 72nd minute just after coming on with Dortmund struggling against the second division’s bottom club.

Another Brandt cross found Hazard at the far post nine minutes later and he slotted the ball home once more to make sure of their spot in the next round of the competition.

“We had control and possession and at the end we managed to win it,” Hazard said. “We had to show more presence in the box. We had a few chances but not that many.

“We had to pressure them and then I think Ingolstadt were getting tired by that stage. I am happy that we advanced with my two goals,” he said.

In a lacklustre first half Dortmund’s Jude Bellingham had their best chance when the England international hit the crossbar with a superb shot from outside the box.

There was little else of note in terms of attacks, with striker Erling Haaland out with a hip flexor injury and Dortmund coach Marco Rose initially opting to rest several of his key players, including Hazard and captain Marco Reus.

However, the hosts should have scored seven minutes after the restart when forward Steffen Tigges somehow sent his header against the crossbar from three metres out before Reus and Hazard were brought on to liven up their attacking play.

With Ingolstadt, who rarely threatened but had managed to keep Dortmund away from their box for about 70 minutes, gradually running out of gas, Hazard combined with Reus and Brandt a minute after coming on to put Dortmund in front.

He then made sure there would be no Cup upset at the Signal Iduna Park with his second goal.

“It was a decent performance from our team,” Dortmund coach Marco Rose said. “We were serious throughout, did not let them have any real chances and then we scored our goals.”

“We are efficient at the moment. We are on a good path (with three wins in a row in the league) but it is important to keep at it,” Rose said.

Fellow Bundesliga clubs Hertha Berlin and RB Leipzig also progressed by beating Preussen Muenster 3-1 and Babelsberg 1-0 respectively. Hoffenheim also booked their spot in the next round with a 5-1 demolition of second-tier club Holstein Kiel.

German champions Bayern Munich are in action at Borussia Moenchengladbach on Wednesday. — Reuters