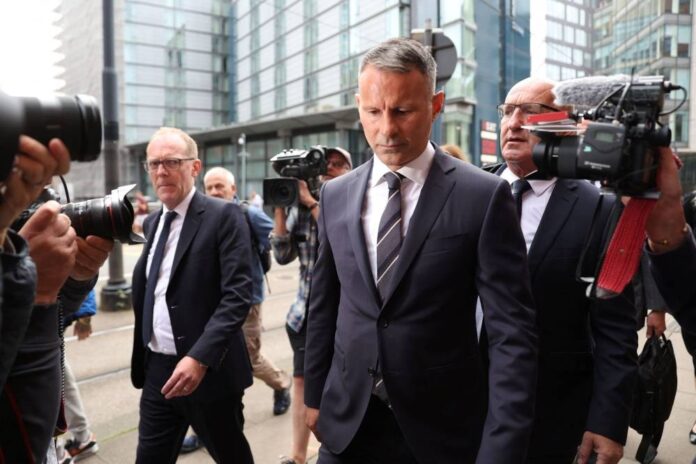 MANCHESTER, Aug 8 — The jury in the trial of former Manchester United winger Ryan Giggs, facing charges of assaulting his ex-girlfriend and her sister, was told by the prosecution today that the Welsh international had a “sinister” side to him.

Giggs, 48, who has stepped down as Wales national team manager due to the case, faces charges of causing actual bodily harm to former partner Kate Greville and beating her younger sister Emma. He also faces one count of coercive and controlling behaviour.

The former footballer, who sat in the dock wearing a dark suit, has pleaded not guilty to the charges and his defence said the allegations were “based on distortion, exaggeration and lies”.

Opening the case for the prosecution, Peter Wright QC said there was a marked contrast between Giggs the player and the way he had behaved with his girlfriend in a “toxic relationship”.

“On the pitch his skills were abundant and a thing of beauty. Off the pitch and in the privacy of his personal life and home and behind closed doors, there was a much uglier and more sinister side to his character,” he said.

Wright said the case involved “a litany of abuse, both physical and psychological of a woman that he professed to love”.

“The systematic and at times violent abuse of a woman is what this case is all about, while all the time preying on her”.

The prosecutor described an incident in which Giggs headbutted Greville and “deliberately elbowed” her sister.

Giggs is on bail on condition that he has no contact with either sister and does not go to any address where he believes they might be.

The former United favourite, who has said he looks forward to clearing his name, was first arrested in the case and released on bail in November 2020.

He said that Giggs acknowledged there was “minor and accidental contact” during a tussle over a mobile phone but denied there was a deliberate headbutt and said it was “not remotely a criminal assault”.

Daw told the jury that former United manager Alex Ferguson and Giggs’ former team mate Gary Neville will be heard from “in some way” during the trial.

Giggs been replaced as Wales manager after initially stepping aside in late 2020 due to the case.

Rob Page has taken over the side who have qualified for November’s World Cup finals in Qatar.

Giggs made 963 appearances over 23 years for Manchester United as a player, a club record, winning a haul of honours including 13 Premier League titles and two Uefa Champions League trophies.