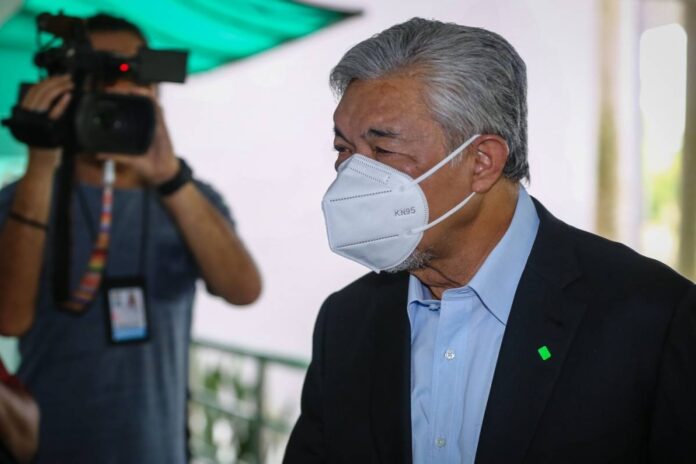 This was revealed during the cross-examination of former UKSB director Harry Lee Vui Khiun, who is also the prosecution’s 15th witness.

Appearing multiple times in the ledger as a recipient, Lee was asked whether he could confirm that “KJ” was indeed referring to the same person as Khairy Jamaluddin, who is the current health minister.

Zaidi also asked whether Lee knew UKSB director Wan Quoris Shah Wan Abdul Ghani is a close associate of Khairy and that both men had worked together in the past.

Zaidi: I presume you know Wan Quoris in that he used to work with KJ before?

Lee: He worked with KJ before I’m not so sure, but I know apparently he (Wan Quoris) said he knows KJ very well.

Zaidi: KJ (in the ledger) I assume it is Khairy Jamaluddin?

Lee: That I am not sure.

In his witness statement, Lee had previously testified that he brought Wan Quoris in as UKSB director because he knew the latter was an Umno man and thus needed the connections within Umno to ease communications with Ahmad Zahid who was then home minister.

When asked by Zaidi whether Lee knew the cash payment withdrawals logged in the ledger were indeed given to Khairy by Wan Quoris, Lee said he would not have known if it had taken place.

Lee did however confirm Wan Quoris would request for funds to be provided, presumably for political donations.

Zaidi: Can we presume money was given to Khairy? Because Khairy has nothing to do with UKSB’s business; can we presume it is for political donation as well?

Lee: For Wan Quoris I would assume it is a political donation.

Zaidi: We agreed early on, that Wan Badak (Wan Quoris) told you he is close to KJ.

Lee: But I don’t know KJ here (in the ledger), as in KJ the minister.

In his witness statement, Lee previously testified the monthly cash payments in Singapore dollar made to Ahmad Zahid for the purpose of political contribution were logged in the ledger owned by former UKSB’s administrative manager David Tan.

Lee also affirmed in court of UKSB’s source of income — proceeds derived from its subcontractor in Hong Kong appointed to implement the VLN on UKSB’s behalf.

When asked by Zaidi to explain the source of funds used to pay out the various individuals named in the ledger, Lee said it was from the same source in Hong Kong.

He also admitted that the monies used to make cash payments in the ledger did not enter bank accounts belonging to UKSB.

According to fact of the case, UKSB had entered into several agreements with the Malaysian government and the Home Ministry for visa facilitation services by operating several One Stop Centres (OSC) in the People’s Republic of China from 2012 onwards.

Ahmad Zahid is facing 33 charges of receiving bribes amounting to S$13.56 million (RM42 million) from UKSB as an inducement for himself in his capacity as a civil servant and the then home minister to extend the contract of the company as the operator of the OSCs in China and the VLN system as well as to maintain the agreement to supply VLN integrated system paraphernalia to the same company by the Home Ministry.

For another seven counts, Ahmad Zahid was charged as home minister to have obtained for himself S$1,150,000, RM3 million, EUR15,000 and US$15,000 in cash from the same company in connection with his official work.

The trial before Judge Datuk Mohd Yazid Mustafa continues May 30.