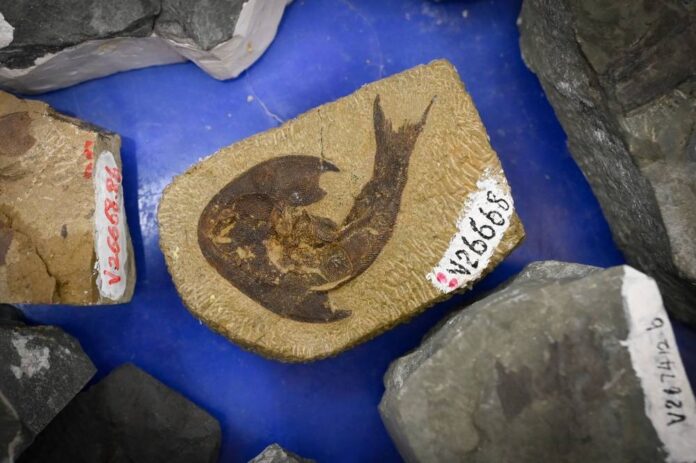 Fish fossils are displayed during a press conference in Beijing on September 28, 2022. — AFP pic

BEIJING, Sept 29 — Fish fossils dating back 440 million years are helping to “fill some of the key gaps” on how humans evolved from fish, researchers said on Wednesday.

Two fossil deposits of ancient fish in Guizhou, southern China, and Chongqing in the southwest were discovered by scientists during a field study in 2019.

The fossils “help to trace many human body structures back to ancient fishes, some 440 million years ago, and fill some key gaps in the evolution of ‘from fish to human,'” researchers from the Institute of Vertebrate Paleontology and Paleoanthropology (IVPP) under the Chinese Academy of Sciences said.

Their findings, which they said “provide further iron evidence to the evolutionary path”, were published in four papers in the journal Nature on Wednesday.

The Chongqing fossil deposit includes a fish — known as acanthodians — with bony armour around its fins and is considered the ancestor of creatures with jaws and a backbone, including humans.

Scientists in 2013 said they had found a 419-million-year-old fish fossil in China that disproved the long-held theory that modern animals with bony skeletons (osteichthyans) evolved from a shark-like creature with a frame made of cartilage.

“The new data allowed us to… gain much needed information about the evolutionary steps leading to the origin of important vertebrate adaptations such as jaws, sensory systems, and paired appendages (limbs).”

The Chongqing fossils are also the world’s only fossils dating back nearly 440 million years which “preserves complete, head-to-tail jawed fishes”, offering a rare peek into a time period regarded as the “dawn of fishes”, the statement said.

“It’s really an awesome, game-changing set of fossil discoveries,” said John Long, the former president of the Society of Vertebrate Paleontology who is currently with Australia’s Flinders University.

“It rewrites almost everything we know about the early history of jawed animal evolution.” — AFP