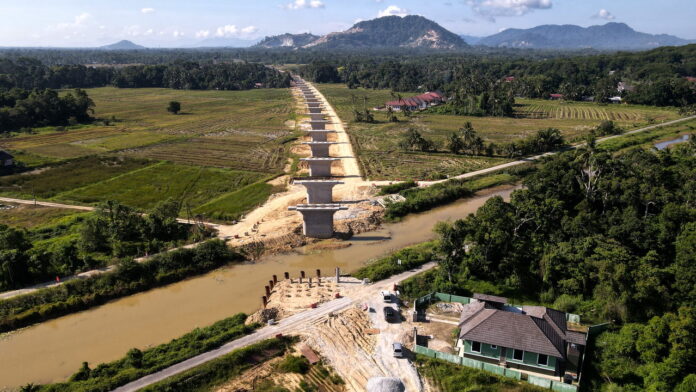 Construction work on the alignment of the East Coast Rail Link Project (ECRL) is being carried out in Kampung Padang Lengkuas, Padang Pisang, Kota Baru, May 9, 2022. — Bernama pic

KUALA LUMPUR, May 14 — Speculation that the ownership of assets and land along the East Coast Rail Link (ECRL) alignment will be transferred to China is completely unfounded, Transport Minister Datuk Seri Dr Wee Ka Siong said.

In a post on his official Facebook page, Wee said ECRL assets are fully owned by the government through Malaysia Rail Link (MRL), while China Communications Construction Company Ltd (CCCC) is the main contractor of the project.

“The ECRL assets are 100 per cent owned by the Malaysian government through MRL and the land along the ECRL alignment are non-transferable railway reserves. The repayment plan to the Chinese government-owned bank also does not involve the transfer of ECRL assets or land along the alignment.

“Any operating losses will be borne together 50:50. This proves the confidence of China in the prospect of ECRL’s operation which will guarantee the quality and sustainability of its services,” he said.

MRL as a wholly-owned subsidiary of the Minister of Finance Incorporated (MOF Inc.) has signed a memorandum of understanding (MOU) with CCCC to establish a joint venture company and through this MOU, 80 per cent of the operating profit will be owned by MRL and the rest by CCCC.

In the meantime, Wee explained that ECRL fares would be determined by the Land Public Transport Agency (APAD) and would be equivalent to the existing train service fare rate.

In addition, he said, the cargo and passenger traffic projections have been reviewed by qualified consultants who have the expertise to collect data and conduct studies.

“Based on data collection and research by consultants, ECRL is able to generate high passenger and cargo traffic given the alignment of ECRL which passes through heavy industries areas and manufacturing hubs that are connected to the country’s major ports.

“There is also high demand for passenger services as the line passes through major cities on the East Coast. Therefore, ECRL can provide transportation options with affordable costs to the residents of the East Coast,” he added.

Apart from that, he said ECRL’s single-track railway was adequate for the projected cargo and passenger traffic in the first 10 years of its operation, while the construction of nine passing loops along the alignment would enable the operation of two-way trains between the East Coast and Klang Valley.

Wee said MRL had also drawn up and implemented a long-term plan to generate sufficient revenue to cover the company’s operating costs and profits from the train operations, and MRL’s ancillary businesses would be used to repay part of the ECRL project loan.

“The benefits that can be generated by the ECRL project through the value-capture of the entire project is the rapid economic development in the East Coast states when rail facilities are provided and the cost of transporting cargo to and from the East Coast decreases by up to 40 to 50 per cent.

“This will increase the competitiveness of the East Coast states and create more new industries that are expected to generate income for the government through taxes, and subsequently (the benefits are) returned to the people,” he said.

The ECRL is scheduled for completion by December 2026, and will traverse the East Coast states of Kelantan, Terengganu and Pahang before linking the Klang Valley on the West Coast of Peninsular Malaysia. — Bernama