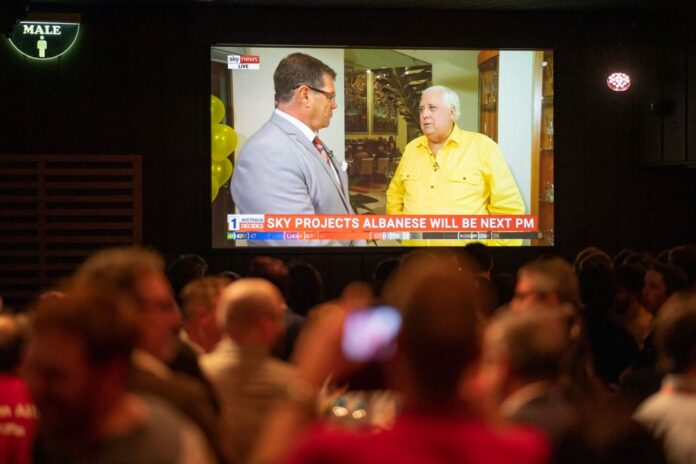 Supporters of opposition leader Anthony Albanese gather at the Labor headquarters at Canterbury-Hurlstone Park RSL Club during Australia’s general election in Sydney on May 21, 2022. – AFP photo

With almost half the votes counted, Anthony Albanese’s centre-left Labor was projected to be the largest party in parliament, but was not yet assured of a clear majority.

After three years marked by punishing natural disasters and a pandemic, Australians backed a string of climate-focused candidates who could yet hold the balance of power.

“People are saying the climate crisis is something they want action on,” said an elated Greens leader Adam Bandt.

“We have just had three years of drought, and then fires and now floods and then floods again. And people can see it, that this is happening and it’s unfolding.”

If the early trends hold, Australians will end a decade of unbroken conservative rule.

Among the high-profile Liberals in deep trouble were economy minister Josh Frydenberg and former ambassador to Israel Dave Sharma, who were both trailing to “teal” candidates.

The long and often bitter campaign had focused on the character of the two leaders, with policy largely put on the back burner.

But young Australians are increasingly angry at the government’s pro-coal policies, a housing market that is largely out of reach, and the misuse of taxpayers’ money.

“I grew up in a community that’s been really heavily affected by the fires and the floods over the past five years,” first-time voter Jordan Neville said in Melbourne.

“To see something be done about that and stop that happening again would be amazing.”

Morrison has resisted calls to cut carbon emissions faster by 2030 and supports mining and burning coal into the distant future to boost the economy.

Earlier Saturday, Labor’s Albanese asked voters to give his centre-left party a “crack” at running the country, and urged people to spurn a “divisive” prime minister.

Morrison — who had trailed in pre-election polls — was able to boast of a resurgent post-lockdown economy and a 48-year-low jobless rate.

He had painted his rival as a “loose unit” who is unfit to steer the economy, but has been plagued by low personal approval ratings, accusations of dishonesty and of putting spin before substance.

Albanese — who himself has been described as bland and uninspiring — focused heavily on Morrison’s alleged failings in the final days of the campaign.

Australians “want someone who is fair dinkum, someone who will ‘fess up if they make a mistake,” said the Labor leader.

Albanese has pledged to end Australia’s foot-dragging on climate change, help people struggling with soaring prices, and hold a referendum on giving indigenous people an institutional voice in national policymaking.

He may now have to cut deals with candidates demanding stronger action on climate, risking the ire of the pro-coal and mining union factions of his party.

Speaking in Adelaide during a four-state election-eve blitz, Albanese welled up as he reflected on his personal journey — from the son of a single mum living in Sydney public housing to the threshold of the highest office in the land.

“It says a lot about this country,” he said Friday, voice cracking with emotion. “That someone from those beginnings… can stand before you today, hoping to be elected prime minister of this country tomorrow.”

If elected, Albanese notes he would be the first Australian with a non-Anglo or Celtic surname to be prime minister.

Voting is compulsory, enforced with a Aus$20 (US$14) fine but also rewarded at many booths that fired up barbecues to offer people a “democracy sausage”.

The election decides who controls the House of Representatives, the Senate and who lives in the prime minister’s “Lodge”.

More than seven million people cast early or postal ballots, according to the Australian Electoral Commission.

Children greeted Morrison excitedly as he arrived with his wife and two daughters to cast a vote at a school in Sydney’s Lilli Pilli suburb.

Asked how he wanted to be remembered if he lost the election, the prime minister told reporters: “That will be for others to determine.”

On Saturday his party launched a last gasp bid to win votes by mass-messaging voters in several election battlegrounds with news that an “illegal boat” from Sri Lanka had been intercepted on its way to Australia.

Both sides are trying to woo voters fretting about the rising cost of living, with annual inflation shooting up to 5.1 percent and wages failing to keep up in real terms. – AFP