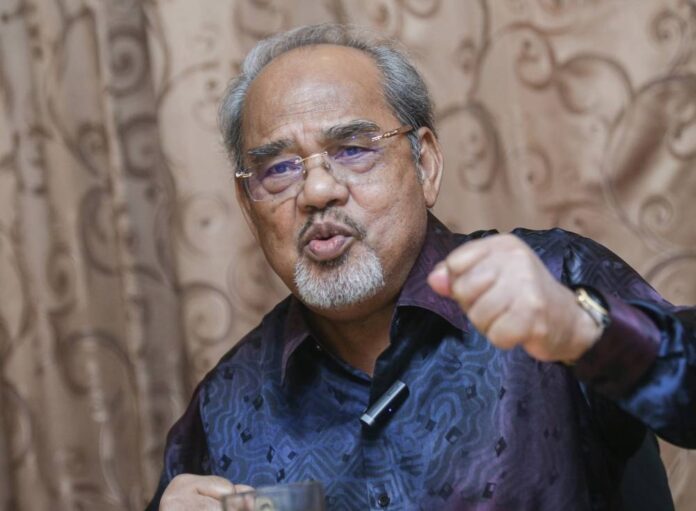 Datuk Seri Tajuddin Abdul Rahman speaks to reporters at a hotel in Ipoh, September 23, 2022. The Pasir Salak MP today insisted he had the undivided support of the Pasir Salak Umno division. — Picture By Farhan Najib

Tajuddin, whom Ahmad Zahid sacked from the party’s supreme council in June, insisted he had the undivided support of the Pasir Salak Umno division.

“Don’t say I’m boasting about myself, but evaluate with the facts and see what are the weaknesses in me as the Pasir Salak MP that hinder me from carrying out the duty again or even as the Umno division chief.

“Pasir Salak supports me 100 per cent as the candidate for the GE15. The division committee have named me as the candidate to the central leadership,” he told a press conference at the Impiana Hotel here.

Tajuddin also pointed out that his track record of being in Umno for 50 years speaks for itself.

“People who know me, know my political career journey will have a different perception of me than what is portrayed,” he said.

In May, Tajuddin was unexpectedly named the ambassador to Indonesia, which was seen as reward for supporting Prime Minister Datuk Seri Ismail Sabri Yaakob’s administration.

However, the controversial appointment did not materialise as he never received his diplomatic credentials from the Yang di-Pertuan Agong.

Tajuddin has been the Pasir Salak MP for three-terms but his candidacy for GE15 became uncertain after a clash with Ahmad Zahid the same month he was named ambassador.

After he was subsequently dropped from the Umno supreme council, Tajuddin held a press conference to accuse Ahmad Zahid of leading the party’s MPs to support PKR president Datuk Seri Anwar Ibrahim’s bid to be prime minister in 2020.