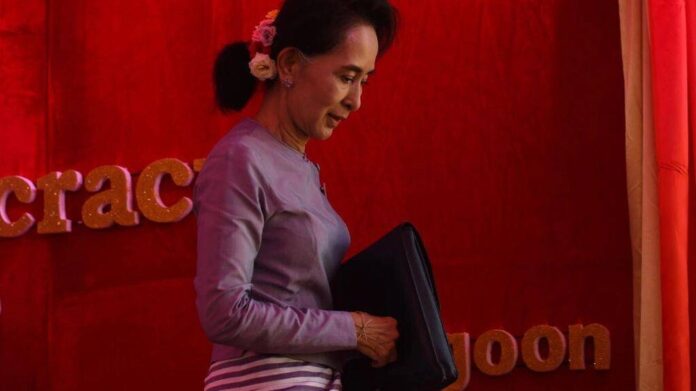 Suu Kyi, 77, has been kept virtually incommunicado by the military and was recently transferred from house arrest to solitary confinement while she faces multiple trials. — AFP file pic

NAYPYIDAW, July 1 — Dialogue between Myanmar’s junta and ousted leader Aung San Suu Kyi to end the bloody crisis unleashed by the toppling of her government last year is “not impossible”, a junta spokesman told AFP today.

The Southeast Asian nation has been in chaos since the putsch, with renewed fighting with ethnic rebel groups, dozens of “People’s Defence Forces” springing up to fight the junta and the economy in tatters.

Suu Kyi, 77, has been kept virtually incommunicado by the military and was recently transferred from house arrest to solitary confinement while she faces multiple trials that could see her sentenced to more than 150 years in jail.

“There is nothing impossible in politics,” junta spokesman Zaw Min Tun told AFP when asked if the junta could enter into dialogue with Suu Kyi to resolve the turmoil.

“We cannot say that (negotiations with Suu Kyi) are impossible.”

“Several countries” had urged opening dialogue with the Nobel laureate, he said, without giving details.

Diplomatic efforts led by the Association of Southeast Asian Nations (Asean) — of which Myanmar is a member — have so far failed to halt the bloodshed.

Last year, the bloc agreed on a “five-point consensus”, which calls for a cessation of violence and constructive dialogue, but the junta has largely ignored it.

Asean envoy and Cambodian Foreign Minister Prak Sokhonn arrived in Myanmar on Wednesday for his second visit aimed at kickstarting dialogue between the junta and opponents to its rule.

He met with junta chief Min Aung Hlaing on Thursday and on Friday met with members of several political parties in the military-built capital Naypyidaw, a junta spokesman said.

The junta has said he will not be allowed to visit Suu Kyi.

“We have performed whatever she asked for related to her health and living situation,” Zaw Min Tun said regarding Suu Kyi’s new living conditions in prison.

Dangling the prospect of dialogue would be “consistent with their (the junta’s)… political calculus”, independent Myanmar analyst David Mathieson told AFP.

“Punish to the extreme then show a sliver of conciliation to ensure they stay in power. Suu Kyi is potentially their way out, if they can overcome their hatred of her,” he said.

Fighting continues across swathes of the country, with local media reporting killing and burning sprees by junta troops as they struggle to crush opposition to the coup.

Almost 700,000 people have been forced to flee their homes since the putsch, the United Nations said in May.

China’s foreign minister was due to land in Myanmar today for a regional meeting, in what will be Beijing’s highest-profile visit to Myanmar since the coup.

It was unclear whether a meeting between Wang Yi and junta chief Min Aung Hlaing would take place, a junta spokesman said.

China is a major arms supplier and ally of the junta and has refused to label the military’s power grab a “coup”. — AFP