Despite crisis, UK’s Blackpool keeps the lights on 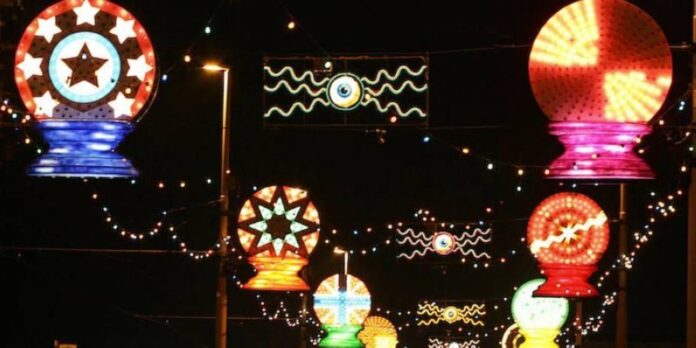 Lights decorate a street in Blackpool in October 2005. — AFP pic

BLACKPOOL, Nov 14 — At this time of year, the British coastal resort of Blackpool shows its best face by night, when one million LED lamps light up the seafront for more than six miles (10 kilometres).

After the Covid pandemic, the tourism-reliant town in northwest England was aiming for brighter times. Then the war in Ukraine and an energy-fuelled inflation crisis hit.

Even though organisations across Britain face soaring electricity bills, the Blackpool Illuminations will stay on this autumn, from early September to January 2.

“It is unthinkable not to have our autumn illuminations,” Ivan Taylor, the deputy leader of the town council, told AFP.

“In terms of our tourism sector, it is very, very important,” he said.

Blackpool claims to be among the first towns to turn on permanent electric street lighting, with eight arc lamps in 1879 — shortly before Thomas Edison patented his breakthrough design for a bulb.

With pauses for the two world wars, the illuminations have been an annual occurrence since a royal visit to Blackpool to 1912, and today attract around 3.5 million visitors a year.

The council had budgeted to spend ?1.75 million (RM9.55 million) on the lights this year, but that did not take account of the rocketing price of electricity, which will show up in next year’s figures.

For large UK businesses, energy bills have doubled or tripled on average since a year ago, while consumer inflation is running at a four-decade high above 10 per cent.

The cost-of-living crisis could also reduce visitor numbers to places like Blackpool.

Just when it was recovering from the pandemic, more than a third of the UK’s hospitality sector is now at risk of failure, according to an industry survey last month by groups representing pubs and restaurants.

The operator of the council-owned Blackpool Winter Gardens entertainment venue, which is a key part of the town’s attractions during the illuminations, proposed to shutter it on quieter days to save money.

Councillors refused the request, fearing it would send a message to the public that Blackpool was closed for business.

“I know it brings a lot of tourists but at the same time, you have got to balance that with the cost,” said Jo Berry, a Manchester resident in her early 40s who was visiting the illuminations.

A light display is a sensitive issue when many Britons say they cannot afford to turn on their heating, she added.

“Let’s just hope we get through the winter and it carries on being mild because it’s so far been unusually warm.

“I hope it stays that way. Because a lot of people can’t turn the heating on at all, never mind only turning it on for a few hours.”

Chris Wheeler, a pensioner visiting the town, said the council did not have a choice.

“You can see the benefits of the lights to the Blackpool economy,” he said.

“If everybody spends a couple of hundred quid (pounds), it’s a lot of money for Blackpool.”

At least the illuminations’ running costs have come down in recent years, after inefficient bulbs were swapped out for low-voltage LED lights.

In 2004 wind turbines contributed to powering the light show for the first time, as climate change came into sharper focus.

Today the Blackpool Illuminations only use green energy from renewable sources like wind, hydropower and biogas, according to the council.

Taylor said if energy costs were to go up much more, the organisers would “make economies within the show in other ways”.

“The return on investment is absolutely worth it,” the Labour councillor stressed.

“They (visitors) are all spending money when they get here. So it’s good for us and it’s good for them, because we want to give them a good time.” — AFP

Facebook
Twitter
Pinterest
WhatsApp
Previous articleEco warriors: S.Africa school puts green issues at heart of teaching
Next articleMuhyiddin: Ahmad Faizal a ‘giant’, will slay Anwar who will never be PM so long as he is friends with DAP