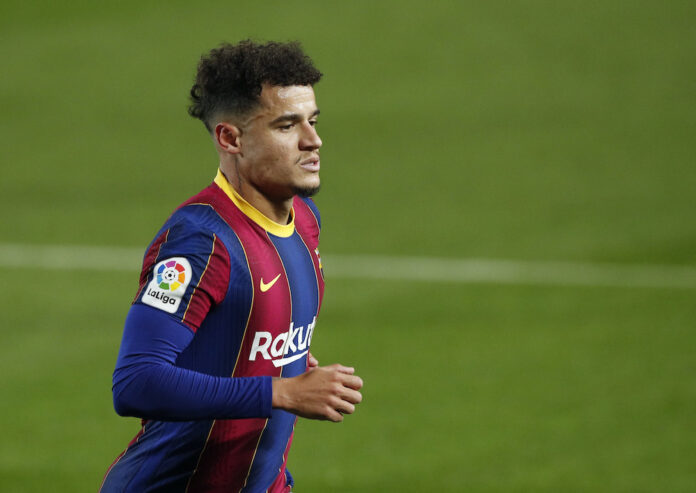 Barcelona loanee Philippe Coutinho has initially moved to Villa Park until the end of the season and is likely to be on the bench for tomorrow’s match. – Reuters pic

LONDON, Jan 14 — Aston Villa manager Steven Gerrard says he will be patient with playmaker Philippe Coutinho and only unleash him at the right time as he prepares his side for the visit of Manchester United.

Barcelona loanee Coutinho has initially moved to Villa Park until the end of the season and is likely to be on the bench for tomorrow’s match.

The Brazil international, 29, has been joined at Villa by Lucas Digne after the defender’s move from Everton this week.

Coutinho, whom Villa have the option to buy in the summer transfer window, lacks match fitness, having not played for a month. He also recently tested positive for coronavirus.

“He is a fantastic talent, we are lucky to have him and at the right time he will be unleashed,” Gerrard, who played with the Brazilian at Liverpool, said today.

“I don’t buy into this ‘he never had the best time at Barcelona’. This is a kid who has won leagues at Barcelona and won the Champions League at Bayern.

“He is hungry to play. If we can get him feeling good and the confidence back, Phil Coutinho is still inside Phil Coutinho.”

Left-back Digne, 28, could make his debut for Villa, who were unlucky to lose 1-0 to United in their FA Cup third-round match at Old Trafford this week.

The Birmingham club have opened talks with defender Kortney Hause over a new deal, with Gerrard also planning discussions with Ashley Young.

Both players are out of contract after the end of the season, with Villa holding an option on Hause. — AFP