HomeEntertainmentCouple claims Peanut, their toy poodle died due to negligence of Malaysian...
Entertainment 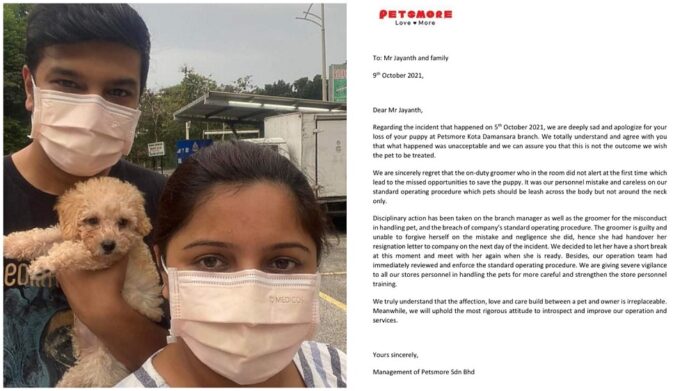 PETALING JAYA, Oct 14 – A couple from India who sent their toy poodle to Petsmore Kota Damansara (KD) before flying to Langkawi for a short vacation, returned to find that their pet had died.

Jayanth Sridhar and Bhumika Gohil had dropped off their five-month-old pet, Peanut, at Petsmore KD on September 30 to stay at the Pet Hotel Facility for five days.

According to Sridhar, 35, who arrived at Subang Airport on October 5, received a call from the pet store at 4.35pm and was told to get to the shop as soon as possible due to an emergency.

Sridhar told Malay Mail that he and his wife hurried to Petsmore KD, where the workers on duty informed them that Peanut had had an accident and died.

However, he requested the workers to provide factual information about the incident, including CCTV footage.

After watching the footage, Sridhar concluded that Peanut’s death was due to workers’ negligence.

“Peanut shouldn’t have even been put on a grooming table as he has a cage or crate for which we paid.

He said Peanut was still young and afraid of heights, especially if he was alone.

“Any animal handler will know this. The groomer was at an adjacent table and could have reacted faster or even kept him in her line of sight.

“He shouldn’t have been on a neck leash and left unattended while the groomer proceeded to other grooming activities. Rather than secure him in his crate, the staff put him on a grooming table with a collar and leash.

“Peanut slipped off the edge of the table and struggled for two minutes before choking to death,” he said.

He added that Petsmore should take accountability of the incident and prioritise animals over business.

Sridhar also filed a police report the next day of the incident and approached the Malaysian Veterinary Service Department (DVS) besides sharing their story on Facebook.

Petsmore Sdn Bhd management issued a statement to Sridhar on October 9 and admitted their mistake for tying the leash around the neck instead of across the body which resulted in the death of a toy poodle.

The operation team also reviewed and enforced the standard operating procedure to enhance their vigilance.

It is also stated that the female groomer who was responsible for this has tendered her resignation letter the day after the incident.