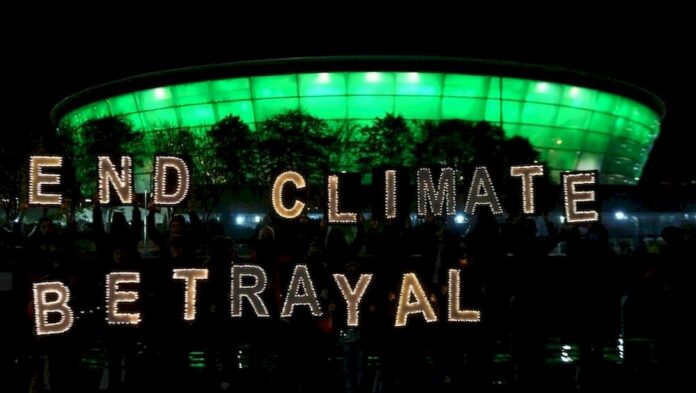 Delegates from some 200 countries are in Glasgow to try to hammer out how to implement the 2015 Paris Agreement goals to limit temperature rises to 1.5-2.0 degrees Celsius.

But the issue of finance – how vulnerable nations are supported to green their grids and brace against climate impacts v has stalked the two-week negotiations, after wealthy nations failed to stump up the US$100 billion (RM415.68 billion) annually they promised over a decade ago.

The deadlock pushed COP26 past its scheduled end yesterday evening, with the summit’s UK presidency confirming that a new draft text would only be published for scrutiny today.

Countries already battered by climate disasters such as record-breaking drought, flooding and storms are demanding they be compensated separately for “loss and damage”, and have made it a red line.

However, a proposal to include the creation of a dedicated facility to administer loss and damage support was quashed by historic emitters, led by the United States, delegates said.

Amadou Sebory Toure, head of the G77+China negotiating bloc, told AFP the proposal was “put forward by the entire developing world, representing six of every seven people on Earth”.

He said separate finance was needed “to effectively respond to our needs to address the loss and damage being inflicted on our peoples, our communities, our economies, by the impacts of climate change”.

“The people on the frontlines are not the ones who caused the problem, we have an ethical responsibility to help in a problem they didn’t create,” he said.

Developing nations say it is unfair for the summit to produce an unbalanced agreement on “mitigation” — how economies can ditch fossil fuels by 2050.

They want specific instruction on how they can meet the bill of decarbonising while also adapting to the natural disasters supercharged by global warming.

Before last night’s deadline came and went, more than 100 indigenous and other protesters marched through the summit venue demanding the rich world honour its promises.

The summit began with a bang as world leaders came armed with a string of headline announcements, from a commitment to slash methane emissions to a plan to save rainforests.

Negotiations received a further boost on Wednesday when the United States and China – the two largest emitters – unveiled a joint climate action plan, although it was light on detail.

But current plans to cut national emissions, all told, would lead to 2.7C of heating, according to the UN, far in excess of the Paris target.

The latest draft COP26 agreement released yesterday called for countries to accelerate “the phase-out of unabated coal power and of inefficient subsidies for fossil fuels”.

That was softer than the first version of the text, but observers said the inclusion of the fuels driving the climate crisis was an important step.

The text requested countries to come back next year with updated climate pledges.

The stakes were outlined during yesterday’s “stock-take” session where countries could express their views on progress so far.

“For many of you it is not existential in the future, it is existential today,” US envoy John Kerry said.

“People are dying today. All around the world the impacts are being felt, today.”

But a few streets away in Glasgow yesday, Oxfam campaigners came dressed in firefighter uniforms and cartoon heads of world leaders including US President Joe Biden.

The “leaders” poured small splashes of water on a large mock fire, to symbolise the rich world’s failure to do more to arrest climate change. – AFP