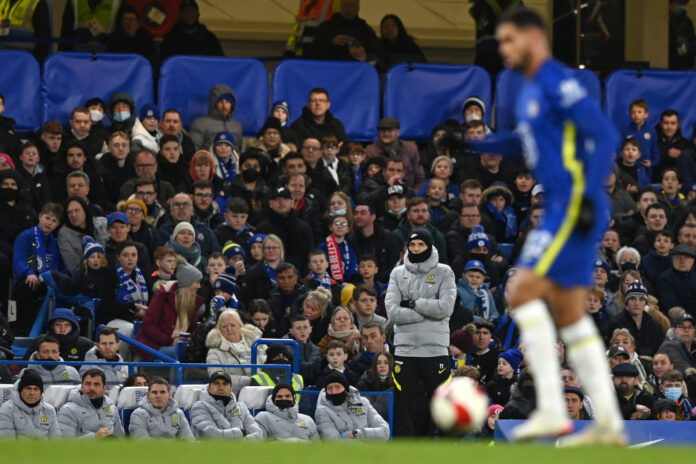 Chelsea head coach Thomas Tuchel looks on from the sidelines during the English FA Cup third round football match between Chelsea and Chesterfield at Stamford Bridge in London, January 8, 2022. — AFP pic

LONDON, Jan 14 — Chelsea will need to outdo themselves to close the gap on Premier League leaders Manchester City given the number of Covid-19 cases and injuries at the club, manager Thomas Tuchel said today.

Second-placed Chelsea are 10 points adrift of champions City after 21 games, with the two sides set to meet at the Etihad Stadium on Saturday.

“We need to overperform to catch Man City and be at the top of the Premier League and to do that you need everybody. But we are not at our 100 per cent,” Tuchel told reporters.

“We have to prove to ourselves we have to step up and close the gap day in, day out. We have trust in what we do, trust in our players, trust in the mentality of our club that we can do it.”

Centre back Andreas Christensen will miss the game after testing positive for Covid-19, while fellow defender Trevoh Chalobah plus full backs Reece James and Ben Chilwell were already sidelined through injury.

“When you get the news that Andreas has Covid after he comes back from injury and play so strong, it’s a setback for everyone mentally because you get a player back and then it’s no,” Tuchel added.

The German conceded that a defeat tomorrow could end the London side’s title ambitions.

“They have had less injuries and less weeks they missed them. They did not suffer from Covid as we did over many weeks, this is the huge difference,” he said. — Reuters