Catlin leads as Asian Tour tees off after Covid-19 break 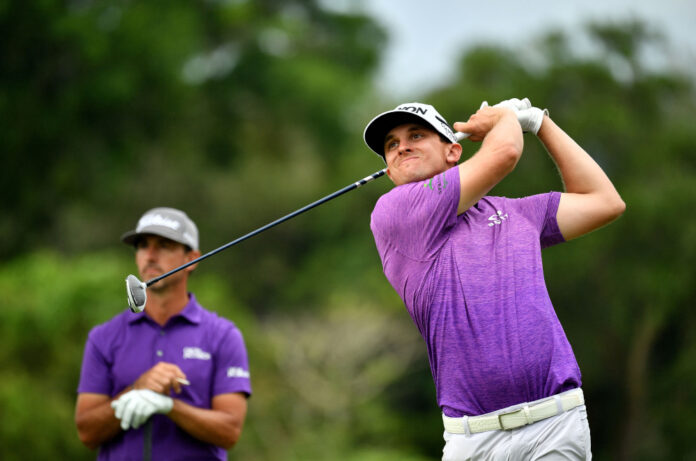 John Catlin of the US playing a shot during round one of the Blue Canyon Championship golf tournament at the Blue Canyon Country Club in Phuket, November 25, 2021. — Paul Lakatos/Asian Tour handout pic via AFP

Eagles at the par five ninth and 15th holes helped the four-time tour winner to a first round 65, seven under par, a shot ahead of Taiwan’s Chan Shih-chang.

The US$1 million (RM4.2 million) tournament on the idyllic holiday island of Phuket saw the first shots played on the Tour since the Malaysian Open in March 2020.

There was disappointment for home star Phachara Khongwatmai as a bogey on the last left him five under par, tied third with Ian Snyman of South Africa and a shot off a share of second place.

Current order of merit leader Wade Ormsby of Australia was one of 14 players to finish on 69, four shots off Catlin, who came to Phuket off the back of a top 10 finish in the US$9 million DP World Tour Championship in Dubai on Sunday.

The Blue Canyon event comes just weeks after Australian legend Greg Norman shook up the world of golf by announcing his new series of 10 events from 2022, backed by US$200 million of Saudi money.

World number 123 Catlin has been in fine form in recent years, claiming three European Tour wins in addition to his Asian titles.

“I made a few long ones, I just happened to play good. And I took advantage of the par fives,” the 31-year-old said.

He sealed his eagle at the ninth with a 30-foot (10-metre) putt, and hit a three wood to nine feet to set up his second at the 15th.

Catlin had previously based himself in the Thai seaside resort of Hua Hin and said the familiarity paid off for him.

“Last time I was here was in May 2020. Feels great, like I have been saying for the past four years it feels like a second home,” he added.

Leading scores after the first round of the Blue Canyon Phuket Championship (par 72):