HomeTechnologyCan you use RFID for toll payment while holding the tag with...
Technology

Can you use RFID for toll payment while holding the tag with your hand? (VIDEO) 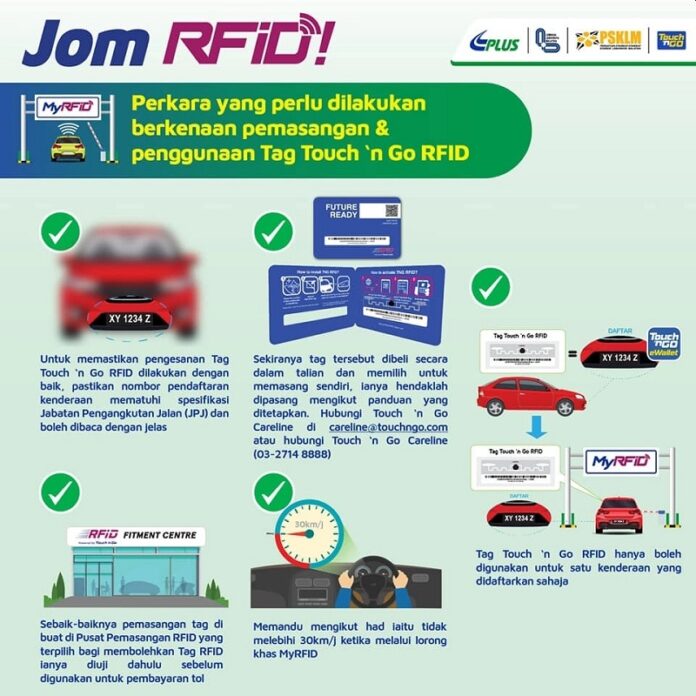 Unlike Touch ‘n Go card and SmartTAG, each unique RFID tag is tied to a specific vehicle and is non-transferable. — SoyaCincau pic

KUALA LUMPUR, Jan 10 — All highways on the west coast of Peninsular Malaysia including the North-South Expressway will be RFID-ready on the 15th of January 2022.

Unlike Touch ‘n Go card and SmartTAG, each unique RFID tag is tied to a specific vehicle and is non-transferable.

Some of you might be wondering, what if you don’t stick the RFID tag to the car and will it work if you hold it manually while you drive through the RFID lane?

Recently, a TikTok user tried just that at a highway toll plaza and it worked.

Eventually, the TikTok user stuck the RFID tag on the windscreen as it was tiring to hold it manually.

It is worth noting that the RFID tag is meant to be placed at the passenger side which is actually more cumbersome to hold compared to a SmartTAG device which works from the driver’s side.

From the video, it is obvious that holding the RFID tag manually is not just troublesome but it is dangerous as well. It is recommended that you stick the tag for a worry-free experience.

The folks at PLUS have posted a list of dos and don’ts for RFID usage. Among the “don’ts” is holding the RFID tag by hand while passing through the RFID lane. This is not allowed and your tag can be blacklisted if you do so.

It also warned that RFID tags are non-transferable and can’t be used on vehicles that are not registered in the RFID system.

The tag should be attached further away from metal surfaces and dark-tinted areas. — SoyaCincau pic

With the introduction of the Automated Number Plate Recognition (ANPR) system on PLUS highway, vehicles must use a number plate that complies with Road Transport Department (JPJ) specifications. ANPR is used by PLUS as a secondary layer of verification which helps in settling toll payment disputes since it captures a picture of the vehicle at the time of entry.

Although RFID lanes support a higher pass-through speed (30km/h) than SmartTAG (20km/h), highway users are advised to be mindful when entering the lane as there’s still a barrier at the moment.

The barriers for the RFID lane will be removed once Malaysia transitions to Single-Lane-Free-Flow (SLFF).

On January 15, 2022, all toll plazas on PLUS highway from Juru to Skudai will have at least one dedicated RFID lane. If you’re not ready to make a switch, existing SmartTAG and Touch ‘n Go lanes are still available.

The Malaysian government aims to phase out TNG and SmartTAG use by the end of 2023 and the lanes will be converted to RFID by phases according to demand.

If you want to install RFID, a new TNG RFID tag costs RM35. You can buy a DIY RFID Self-fitment kit online or from the TNG eWallet app.

If you prefer to have someone install it for you, you can visit one of TNG’s authorised fitment centres.

RFID is seen as the first step towards a Multi-Lane-Free-Flow (MLFF) highway experience where there are no more dedicated lanes and barriers for toll payments. For a seamless experience, RFID is tied to a Touch ‘n Go eWallet which is more convenient to reload compared to physical TNG cards.

On top of that, users can set auto-reload which allows you to top up automatically from your saved debit or credit card. The government aims to implement MLFF with RFID by the end of 2026. — SoyaCincau