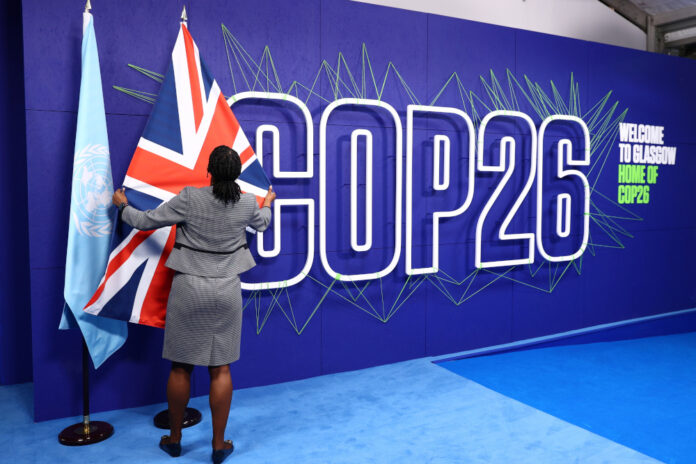 File photo of a employee adjusting flags before the arrival of leaders for the UN Climate Change Conference (COP26) in Glasgow, Scotland November 1, 2021. — Adrian Dennis/Pool pic via Reuters

GLASGOW, Nov 13 – The British hosts of the COP26 UN climate talks published a proposal today to make sure rich countries deliver climate finance to the world’s poorest nations in future years, after past promises remain unfulfilled.

Finance has proved one of the toughest issues to solve at the meeting in Glasgow, Scotland. Developing nations say rich nations whose emissions are responsible for the majority of human-caused climate change have failed to meet a long-held promise to deliver US$100 billion (RM415.76 billion) per year by 2020 to support their efforts to cope with the effects of global warming.

The draft document, which is one of many drawn up by Britain to be published at the end of COP26, needs approval from the nearly 200 countries represented at the summit. It asks a UN committee to report next year on progress towards delivering the $100 billion. Government ministers would also meet in 2022, 2024 and 2026 to discuss the issue of finance.

The aim of the regular check-ins would be to keep up pressure on rich countries to make good on their promises to mobilise the cash after they failed to meet their 2020 goal.

The wording of the British proposal “notes with serious concern” that the US$100 billion has still not been met, and urges countries to increase their contributions to deliver it.

Rich countries expect to deliver the US$100 billion in 2023, although some have suggested it could be met next year.

The European Union and Italy were drawing up a last-minute proposal yesterday that would use special drawing rights to help make sure the US$100 billion target is met next year, an EU official said. – Reuters