Blinken demands action on Putin at UN showdown on Ukraine 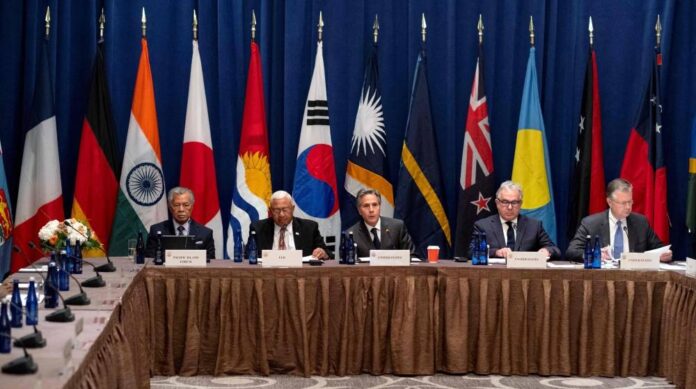 US Secretary of State Antony Blinken delivers opening remarks during a meeting of the Partners in the Blue Pacific on September 22, 2022, in New York. – AFP pic

NEW YORK, Sept 23 – US Secretary of State Antony Blinken yesterday demanded President Vladimir Putin be held to account as he faced Russia in a Security Council session in which the United Nations catalogued abuses in Ukraine.

Pressure has swelled against Moscow as world leaders attend the UN General Assembly, but in the highly anticipated first encounter between the top Russian and US diplomats since the war in Ukraine, the Kremlin and its critics for the most part spoke past one another.

“The very international order we’ve gathered here to uphold is being shredded before our eyes,” Blinken told the Security Council in a special session.

“We cannot – we will not – let President Putin get away with it,” he said.

Blinken accused Putin of adding “fuel to the fire” with recent steps including calling up reservists and planning referendums in Russian-held Ukrainian territory just as Kyiv made gains on the ground.

The American said it was critical to show that “no nation can redraw the borders of another by force.”

“If we fail to defend this principle when the Kremlin is so flagrantly violating it, we send the message to aggressors everywhere that they can ignore it, too.”

Russian Foreign Minister Sergei Lavrov – whom Blinken has refused to meet individually since the February invasion – lashed out at Western accusations.

“There’s an attempt today to impose on us a completely different narrative about Russian aggression as the origin of this tragedy,” Lavrov said.

He accused Ukraine of “Russophobia,” including through its imposition of Ukrainian language rules.

“The United States and their allies with the connivance of international human rights organizations have been covering the crimes of the Kyiv regime,” said Lavrov.

One speaker after another took the floor to assail Russia and demand Putin stop the war, and a stern-faced Lavrov abruptly exited after his address.

“I don’t think there was anybody in that room across the Security Council, from (Chinese Foreign Minister) Wang Yi to Tony Blinken, who gave Vladimir Putin or Lavrov a shred of comfort,” a US official said on condition of anonymity.

Current council head France called the session to highlight the quest for accountability in Ukraine.

“There is no peace without justice,” French Foreign Minister Catherine Colonna told reporters.

Opening the meeting, Secretary-General Antonio Guterres said the UN rights body has seen “a catalog of cruelty – summary executions, sexual violence, torture and other inhumane and degrading treatment” against civilians and prisoners of war.

“All these allegations must be thoroughly investigated, to ensure accountability,” he said, without pointing the finger at Russia.

Ukraine’s Foreign Minister Dmytro Kuleba reiterated President Volodymyr Zelensky’s demand for a special tribunal and “punishment” for Russia over its invasion and abuses.

Kuleba said some responsibility for the atrocities rests with officials like Lavrov.

“Russian diplomats are directly complicit, because their lies incite these crimes – and cover them up,” Kuleba said.

Highlighting evidence from Ukraine was Karim Khan, prosecutor of the International Criminal Court, which months ago announced an investigation into possible war crimes.

“In my view the echoes of Nuremburg should be heard today,” he told the Security Council, referring to the historic Nazi war crimes trials in Germany.

Khan has traveled to Ukraine and visited Bucha, where the discovery of dozens of bodies in streets and mass graves horrified the world.

Moscow at the time dismissed the atrocities as fake, and yesterday Lavrov said Ukraine’s efforts to blame Russia is a “propaganda operation.”

Khan pushed back, telling Security Council members including Lavrov: “When I went to Bucha, and went behind St. Andrew’s church, the bodies I saw were not fake.”

Russia before the war forged closer ties with China. But Washington has welcomed what it sees as a cautious tone by Beijing, which has not sent significant military supplies to Moscow.

“The priority is for the parties to resume dialogue without preconditions,” Minister Wang Yi told the session. – AFP