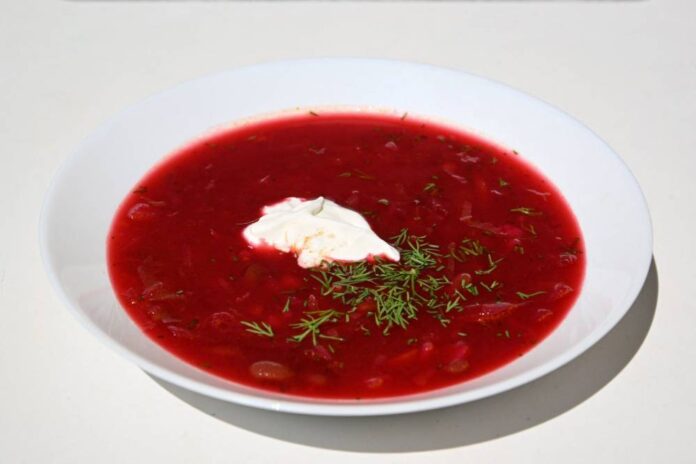 PARIS, July 2 — The UN’s cultural agency on Friday inscribed the culture surrounding beetroot soup known as borshch in Ukraine on its list of endangered cultural heritage, a recognition sought urgently by Kviv after its invasion by neighbouring Russia.

Ukraine prizes borshch, a nourishing soup with beetroot as its base, as a national dish even though it is also widely enjoyed in Russia, other ex-Soviet countries and Poland.

The Ukrainian culture of borshch cooking “was today inscribed on Unesco’s list of intangible cultural heritage in need of urgent safeguarding,” by a Unesco committee, it said.

The decision was approved after a fast-track process prompted by Russia’s invasion of Ukraine and the “negative impact on this tradition” caused by the war, the agency said.

“People are unable not only to cook or grow local vegetables for borsht, but also to come together” to eat it, “which undermines the social and cultural well-being of communities,” it said, using one of several alternative spellings for the soup.

Kyiv hailed the move as a much-needed victory on the cultural front after four months of Russian bombardments.

For the first time in history, the nomination jumped the queue and was considered in an expedited fashion given “the military aggression against Ukraine in real time and the real threat to the cultural object,” Deputy Foreign Minister Emine Dzeppar said on Twitter, adding: “Ukrainian Borsht derussified!”

“We had hundreds of pages of proof that borshch cooking culture is actually Ukrainian, and the whole engine of Russian propaganda was against us,” he said on Facebook.

“Victory in the borshch war is ours,” Ukraine’s Culture Minister Oleksandr Tkachenko said on Telegram, adding that Ukraine “will win both in the war of borshch and in this war.”

Adding a landmark site or traditional activity to the Unesco list aims to mobilise attention to ensure it is preserved against risks that would jeopardise its existence.

The committee said the war had “threatened the viability” of Ukraine’s borshch culture in Ukraine.

“Whether as part of a wedding meal, the focus of food-related competitions or as a driver of tourism, borscht is considered part of the fabric of Ukrainian society, cultural heritage, identity and tradition,” it noted.

But Moscow slammed the decision, with foreign ministry spokeswoman Maria Zakharova accusing Kyiv of trying to appropriate the soup for “one people… one nationality… This is xenophobia,” she said.

She later said on Telegram: “To give the world a culinary example of ‘modern Kyiv nationalism,’ I will cite a fact: Hummus and pilaf are recognised as national dishes of several nations.”

“Borshch has no nationality! Just like bread, potatoes, cabbage — Is it national? What nationality can it have!” a 60-year-pensioner in Moscow who gave her name as Tatyana told AFP.

But Alexey Gorbunov, a 49-year-old decorator in Moscow, was more sympathetic.

“Certainly, it is part of both Russian and Ukrainian legacies, but I think it’s an explicit symbol of Ukraine which I directly associate with Ukraine, especially the one with pampushka (savoury buns) and garlic,” he said.

Unesco insisted that Ukrainian borshch was a version of a dish popular elsewhere.

Nonetheless, “Ukrainian borshch — the national version of borscht consumed in several countries of the region — is an integral part of Ukrainian family and community life.” — AFP