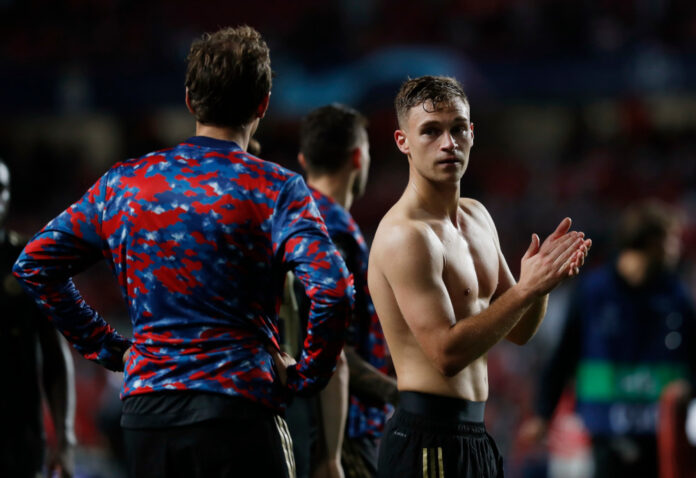 BERLIN, Oct 26 — Joshua Kimmich will be under the spotlight for Bayern Munich at rivals Moenchengladbach tomorrow amid a fiery debate in Germany since the footballer revealed he opted not to be vaccinated against Covid-19.

The 26-year-old is set to play for Bayern in a German Cup second-round tie, but off the pitch, his decision not to get vaccinated has even drawn comment from the government in Berlin.

On Saturday, Kimmich revealed he decided against being vaccinated, despite having founded the “We Kick Corona” charity last year.

“It’s not that I’m a denier of the coronavirus or an opponent of vaccination,” said Kimmich, who based his decision on “personal concerns”.

The footballer’s stance drew comment from Caretaker Chancellor Angela Merkel’s spokesman, Steffen Seibert, who hopes the footballer will inform himself and “let all available information about the vaccines approved in the EU sink in”.

Siebert urged Kimmich to get vaccinated because the Bayern star is “someone who is looked up to by millions” as a role model.

Kimmich appears to be in the minority among Germany’s top flight footballers.

Christian Seifert, managing director of the German Football League (DFL), has said around 94 per cent of Bundesliga players are vaccinated.

Of Germany’s population of 83 million, around 66 per cent are fully vaccinated, but Europe’s biggest economy is currently in the fourth wave with 10,000 new cases of the coronavirus reported today.

Since testing positive for Covid-19 last week, Bayern coach Julian Nagelsmann has been giving training and matchday instructions from home where he is quarantined.

Kimmich says he may get vaccinated in the future and team-mate Thomas Mueller hopes it will be sooner rather than later.

“As a friend, it’s an absolutely acceptable decision,” said Mueller.

“As a teammate, and if you also look a little at what might be better for everyone… my opinion is perhaps that the vaccination would be better.”

Yesterday, Bayern president Herbert Hainer said he would be happy if Kimmich “still gets vaccinated, but there is no compulsory vaccination. One has to respect the decision.”

Kimmich has drawn plenty of criticism from medical experts.

“It is the personal decision of Kimmich and it should have stayed that way.”

There is also some support.

In a statement, Carsten Ramelow, vice-president of the footballers’ union VDV, said it must be “accepted if individual players have concerns about side effects of the vaccination and therefore hold a different opinion.”

The chair of the German Ethics Council also stressed the importance of respecting Kimmich’s “private decision”.

However, the council’s chairwoman Alena Buyx told Sky “I think it’s a pity. It would be great if he would have used his platform to get better advice in order to be a role model.”

Buyx is concerned sceptics could use his statements to “cast doubt over vaccinations”. — AFP