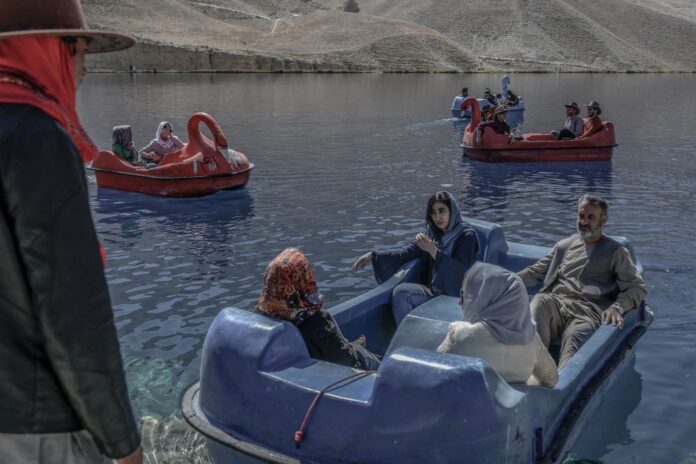 People sit on paddle boats for a ride at the Band e-Amir lake in the Bamiyan Province on October 4, 2021. — Reuters pic

KABUL, Oct 11 — The stunning azure waters of the Band-e Amir lakes are once again attracting Afghan tourists, who brave bumpy roads to experience the so-called Grand Canyon of Afghanistan.

The six lakes at the heart of the Hindu Kush mountain range were — according to legend — a miracle creation of Ali, the son-in-law and cousin of the Prophet of Islam, Mohammed.

Their striking colour is down to the rich mineral content of the waters, thanks to the surrounding limestone cliffs.

After the Taliban seized power, the site in Bamiyan province was deserted, but seven weeks later tourists have begun to return.

They rent paddle boats in the shape of swans imported from Iran, paying the equivalent of eight dollars an hour.

Taliban guards brandishing rocket launchers have also taken trips out on the water.

“We have come from Kabul for the first time,” said 23-year-old teacher Asal Walizada.

“The route was safe and we had no problem. It’s beautiful here,” she added.

Visiting with friends, 17-year-old Hadi cried out with joy as he plunged into the brisk waters in bathing shorts reaching below his knees.

“I’ve lived here for four years and each day when the water is warm enough I swim in the lake,” he said.

Bamiyan was long one of the safest regions in Afghanistan and for the souvenir and craft merchants who line the route to the main lake, the return of local tourists is uplifting. — ETX Studio

Muafakat already on its last breath, Umno’s Zahid says of pact with PAS

Muafakat already on its last breath, Umno’s Zahid says of pact with PAS