HomeSportsAustralian Open director expects up to 95pc of players to be vaccinated...
Sports 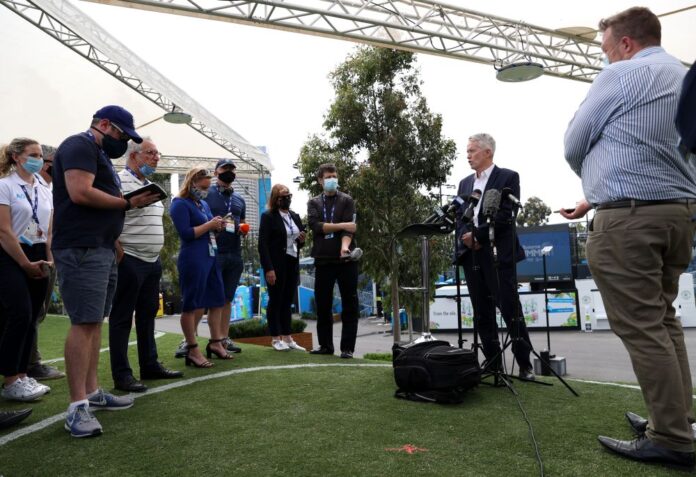 SYDNEY, Nov 25 — Australian Open tournament director Craig Tiley expects up to 95 per cent of professional players will be vaccinated against Covid-19 by the time of the Grand Slam in January but is unsure whether Novak Djokovic will be among them.

Tiley said Victoria state’s strict vaccination mandate had motivated players to get their shots before Melbourne Park, where fans and staff will also be banned if unvaccinated.

Tiley also said he had spoken to world number one Djokovic, the Australian Open men’s champion, but was none the wiser as to the Serbian’s vaccination status.

“Today more than 85 per cent are (vaccinated),” Tiley said of professional players on local radio station SEN on Thursday.

“And we take a lot of credit for that because we put a vaccination requirement on it.

“We think by the time we get to January it will be between 90-95 per cent vaccinated because if you’re not, you cannot play.”

Tiley said there were “one or two players” who had medical exemptions from vaccination but the exemptions were in line with Victoria’s health rules.

“And so it should be, because there shouldn’t be any preferential treatment coming into the state compared to what the regular community is going through,” he said.

Djokovic has declined to disclose his status, saying it is a matter of personal choice, and was non-committal about defending his Australian Open title when asked about it at the ATP Finals.

“Novak has won nine Australian Opens, I’m sure he wants to get to 10,” said Tiley.

“He’s on 20 Grand Slam titles as is Rafa Nadal, who is coming, and Roger Federer.

“One of them is going to surpass the other and I don’t think Novak would want to leave that … to someone else.”

Though massively successful at Melbourne Park, Djokovic has rubbed local fans the wrong way at times and was pilloried in January for trying to secure better quarantine conditions for players as they isolated in the lead up to the 2021 tournament.

Tiley did not expect fans would give Djokovic a hard time if he appeared at the tournament because it would mean the Serb had got with the programme and vaccinated.

“He’s one of the greatest players of all time,” said Tiley.

“He’s had a view on something, some share (it) and the majority don’t. And I think there will be fair treatment of Novak.” — Reuters

Facebook
Twitter
Pinterest
WhatsApp
Previous articleLooting and fires break out during Covid protests on France's Martinique
Next articleJohor exco reveals over 1,000 businesses shut down, causing over 12,000 workers to lose jobs due to Covid-19