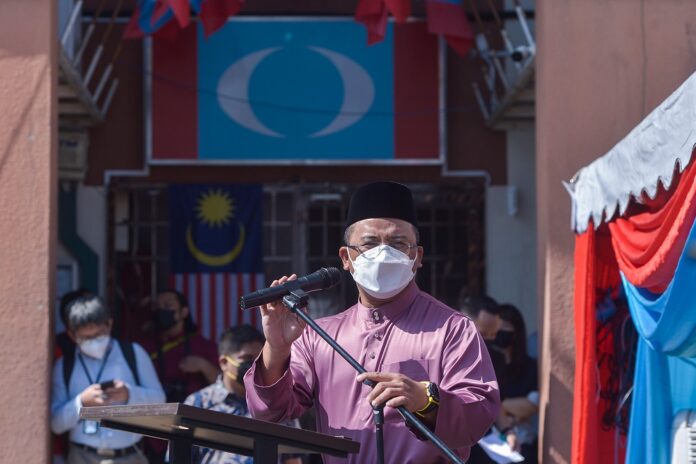 Amirudin stated that the Pakatan coalition has settled all differences and reached a consensus heading into the state poll. – Picture by Miera Zulyana

In a press conference today, Amirudin stated that the coalition has settled all differences and reached a consensus heading into the state poll.

“So I think the assertion is not true. For all the three coalitions contesting here, be it BN, PN and PH, PH has announced its candidates way earlier.

“So all this speculation is hearsay. Perhaps there are grouses here and there but from the coalition’s presidential council, PH state leadership, while there are differences, we resolve everything through consensus and discussions among one another,” he said.

Amirudin was asked about the apparent absence of DAP during PKR’s candidate announcement, which many asserted could have been due to the former being unhappy with the decision by PH chairman Datuk Seri Anwar Ibrahim to field the former Umno men.

Amirudin stressed that the coalition’s election machinery, composed of all component party members, is working well together.

“When DAP announced their candidates, PKR and Amanah’s leadership were not in attendance as well. So this shows that each party has its own strategy.

“But what is clear is an alliance of PKR, Amanah, DAP and Upko, and in this election we are using one logo and not contesting against one another,” he added.

On November 6, Anwar announced that former Umno assemblymen Datuk Seri Idris Haron and Datuk Nor Azman Hassan would be contesting under PH.

Idris, who is the immediate former Melaka chief minister and Sungai Udang assemblyman, will be contesting in the Asahan state seat.

As for Nor Azman, he will be defending his Pantai Kundor state seat, which is under Amanah.

Melaka will vote on November 20, with 28 state seats to be contested following the collapse of the previous government.