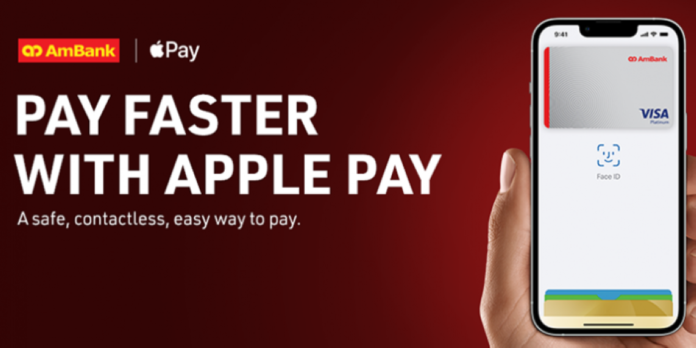 On the website, AmBank states there is no transaction limit for Apple Pay, as opposed to the usual contactless card limit of RM250 per purchase and RM750 daily. — AmBank website screenshot via SoyaCincau

AUG 8 — The cat is finally out of the bag. AmBank’s Apple Pay website has just gone live, confirming that Cupertino’s contactless payment service has finally arrived in Malaysia. This follows several hints of its impending launch, each getting bigger and bigger.

The website even includes two YouTube videos (since taken down) explaining how you can pay for purchases. You will need to look out for the Apple Pay and EMV contactless payment (i.e. the ‘wave’ symbol) logos; if the payment method is supported, you can simply tap your iPhone or Apple Watch on the terminal and use either Face ID, Touch ID or your passcode to verify.

On the website, AmBank states there is no transaction limit for Apple Pay, as opposed to the usual contactless card limit of RM250 per purchase and RM750 daily. There’s also no limit for Apple Pay transactions made online using your iPhone, iPad or Mac. Of course, how much you can actually spend is subject to your AmBank card’s authorised credit limit.

To get users onto the bandwagon, the company is offering a RM50 cashback (oddly limited to RM20) for their first transaction and another RM50 for those who made their first Apple Pay purchase on an Apple device (minimum cost RM849) bought using an AmBank Credit Card/-i.

Rumours of Apple Pay’s arrival in Malaysia have been swirling ever since an SMS purportedly from AmBank confirming Apple Pay availability surfaced on Twitter last month. AmBank’s response to the matter was not straightforward – it did not denounce the message as fake, rather stating that it does not comment on market rumours and speculation.

This was followed by the option of Apple Pay popping up on the Shopee app last week. Then, Maxis stores started displaying the Apple Pay logos on their signages, pouring more fuel in the fire. The website going live confirms those rumours once and for all.

Apple Pay isn’t actually supported in Malaysia on iOS 15.6 yet – when you try to add a card to the Wallet app, a prompt (with the option to either cancel or “Learn More”) only tells you: To add cards, keys, tickets and passes to Wallet, look for the Add to Wallet button in apps, emails and websites.

However, the functionality will likely be added in an upcoming software update, possibly 15.6.1. This could very well be the last update before iOS 16 is introduced sometime next month.

AmBank has pulled the website, including the embedded videos, saying that it made a mistake in putting it up.

Thanks Dian Bato and Siang Xi for dropping us tips in our RKMD Facebook Group. — SoyaCincau