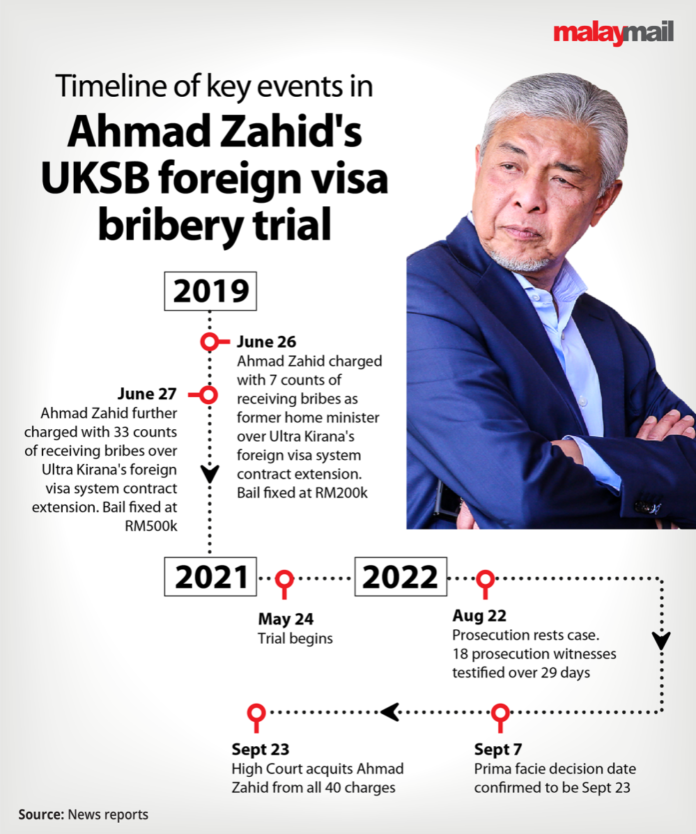 Walking out of the courtroom, the former minister said justice has been served even though he had already been punished beforehand in the court of public opinion.

“From the very first day until today’s decision, I have remained confident that the law and its execution has been scrutinised thoroughly by the honourable judge.

“I have been humiliated, disgraced, called all sorts of names and even punished beforehand by the court of public opinion, but alhamdullilah, today we have witnessed that the law has been upheld for the sake of justice and I am grateful,” the Bagan Datuk MP told reporters after his acquittal.

Ahmad Zahid added that all the accusations were unfounded, and that he had survived the test.

He expressed gratitude to his team of lawyers Datuk Hisyam Teh Poh Teik, Hamidi Mohd Noh and Datuk Ahmad Zaidi Zainal and commended their professionalism.

The High Court had earlier granted Ahmad Zahid a full discharge amounting to an acquittal after ruling that the prosecution had failed to prove prima facie that he received bribes from Ultra Kirana Sdn Bhd, the company awarded a government contract for a foreign visa system as the then home minister.

But Ahmad Zahid is still standing trial for another corruption case where he is accused of 47 criminal breach of trust, corruption and money laundering charges involving tens of millions of ringgit belonging to Yayasan Akalbudi, the charity organisation he founded.