HomeTechnologyYouTube rolls out automatic captions for all (VIDEO)
Technology 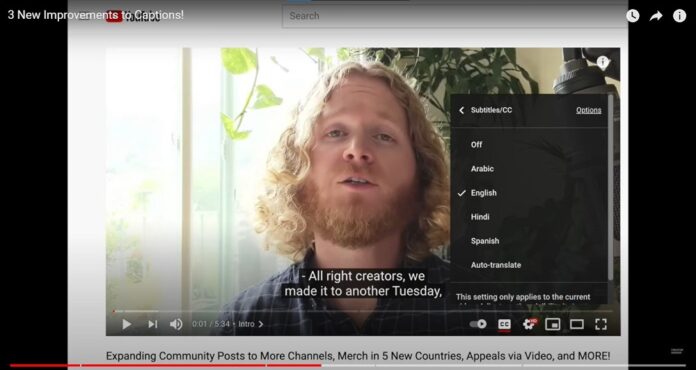 YouTube has unveiled three new options to improve automatic captioning on both the site and the mobile app. — Picture courtesy of YouTube

SAN FRANCISCO, Oct 12 — On a mission for more inclusiveness, an increasing number of social networks are developing automatic captioning to make their content as accessible as possible.

And YouTube is no exception. The video streaming platform now allows all users to set up automatic captions even during live streams.

Until now, only certain accounts — those with at least 1,000 subscribers — could try this tool in the form of a beta test.

Now YouTube plans to extend this possibility to all creators on the platform. For the moment, only English is available, but YouTube has already announced that other languages will be added later. The only downside is that no launch date has been made official.

Users will be able to go to their live control room settings via YouTube Studio to enable or disable the option as they wish.

In addition to automatic subtitling, YouTube also plans to enable automatic translation of a video’s subtitles in multiple languages directly on the mobile app: “We plan to soon bring this feature to mobile, allowing our viewers to access even more content in a language that they understand,” a YouTube employee announced in an explanatory video. Until now, viewers could choose to translate the automatic captioning of a video when that option was available.

And YouTube has finally announced an option to make it easier for users to find a moment in a video with the help of the transcripts as well as through the new “search” tool: “This allows them to find the most interesting information without watching the entire video,” we can hear in the Creator Insider video. This feature should also be implemented into YouTube’s mobile application.

A range of different features developed for boosting inclusiveness on the platform. TikTok, Instagram, and even Twitter have already addressed this issue by improving or implementing automatic subtitling of videos in a bid to seduce more internet users. — ETX Studio