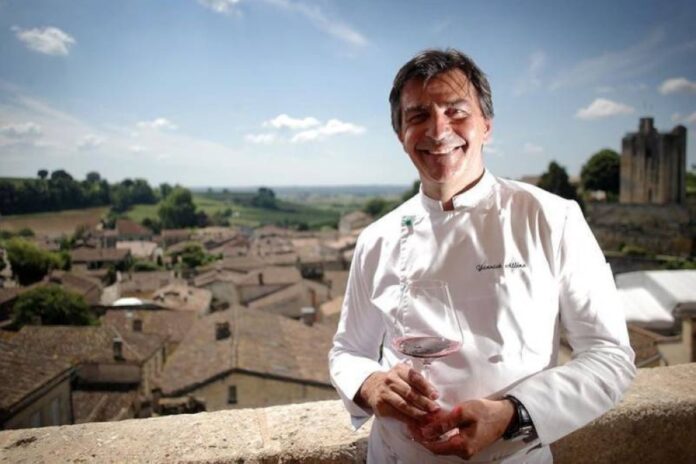 Yannick All?no further reveals his passion for wine by sharing his culinary advice at the Table de Pavie in Saint-Emilion. — Picture courtesy of Yannick All?no/Instagram via ETX Studio

PARIS, Aug 16 — From the late French chef Alain Senderens’s role in popularising food and wine pairings to the wine recommendations of Cyril Lignac, chefs’ interest in the world of wine is of course nothing new.

But now an increasing number in France are getting even more closely involved in the actual creation of fine wines, like the many international celebrities who have put associated their name and image with top vintages.

Among ros? wines from the French region of Provence, the Bandol appellation is famous for vintages associated with gastronomic pairings.

Cradled by the sea breezes, the Var vineyards, which cover just over 1,500 hectares, enjoy an international reputation for producing delicate, fragrant wines — including ros? wines — that can be kept in cellars for several years.

The prestigious seaside location of Bandol is just 55km away from Marseille and its Michelin three-star restaurant on the port. What could be more natural for the chef of this restaurant, Le Petit Nice, known for its flavours evocative of the sea, than to launch a wine collaboration with one of the estates of the appellation?

When you think about it, the pairing between a Bandol ros? and G?rald Passedat’s iconic dish — a dish of sea bass with tomato and truffle made in homage to his grandmother — is obvious.

It’s the first time that this major name in Marseille gastronomy has put his signature on a wine. G?rald Passedat has created his first wine in association with an estate whose wines already featured prominently on the Petit Nice wine list.

Ch?teau Salettes is one of the oldest names with the Bandol appellation. Promising a flavour that is both fresh and fruity, it’s a blend of mourv?dre, grenache and cinsault from a plot selection installed on the highest part of the estate. Chef Passedat wanted his wine to stand out and put his taste for art into the mix by asking his artist friend Invader to design a pictorial label.

The cuv?e has been produced in a limited series of 1,200 bottles and will soon be complemented by a white and a red. It can be found directly at the restaurant Le Petit Nice, or at the estate of Ch?teau Salettes.

A wine launch from a chef who doesn’t own a vineyard isn’t a one-off. Further north, two big names in gastronomy of the Rhone Valley have come together to promote the good tastes of their homeland.

In Valence, Anne-Sophie Pic has long been familiar with the work of her illustrious wine merchant neighbor, Michel Chapoutier.

The French star, who transforms vines into treasures that pay off — from Germany to Australia — has a full range designed to complement the dishes of the three-starred chef. The latest launch highlights the fruitiness of a typical grape variety of the Rhone valley, Marsanne. Produced by Chapoutier but elaborated by the chef and her renowned sommelier, Paz Levinson, the wine is a white that will appeal to fans of natural wines, with its absence of sulfur. It’s priced at around EUR14 (RM63) per bottle and is available at Anne-Sophie Pic’s restaurants in Paris and Valence.

Chapoutier not only collaborates with Anne-Sophie Pic, but is also a close friend of Yannick All?no. The chef of Paris’s Pavillon Ledoyen and the winemaker-merchant launched their first joint wine back in October 2010, a Saint-Joseph made from Syrah grown in Tournon.

In an interview with Terre de Vins magazine, the chef indicated that he had bought six hectares of vines in this Rhone Valley appellation as well as in Crozes-Hermitage alongside the star winemaker.

Chef All?no’s affinity for the world of wine is no secret. The chef even organised a special Rhone Valley wine event within his three-star Parisian restaurant back in 2018. A native of Puteaux, All?no has also demonstrated his strong ties to the Ile-de-France terroir (the area around Paris), which was once the largest vineyard in France (until the 18th century), by replanting 30 acres of biodynamic vines, some 30 kilometres from Paris, at Domaine Marquis d’Angerville.

The latest development is his new role as consultant to Ch?teau Pavie, a Saint-Emilion grand cru class?. The connection between All?no and the Bordeaux region is echoed between a connection between vineyard and the food offering, with a menu centred around foie gras with verjuice (a juice extracted from unripe grapes) or turbot cooked on bone marrow with vine shoots.

Finally, we can’t talk about the relationship between chefs and the world of wine without mentioning the dual role of great chef and winemaker Jean-Andr? Charial. The owner of the very popular Baumani?re hotel-restaurant in Les Baux-de-Provence produces his own wines in the heart of the Alpilles, following biodynamic principles. He works with the domains of Lauzi?res and Fontch?ne. — ETX Studio