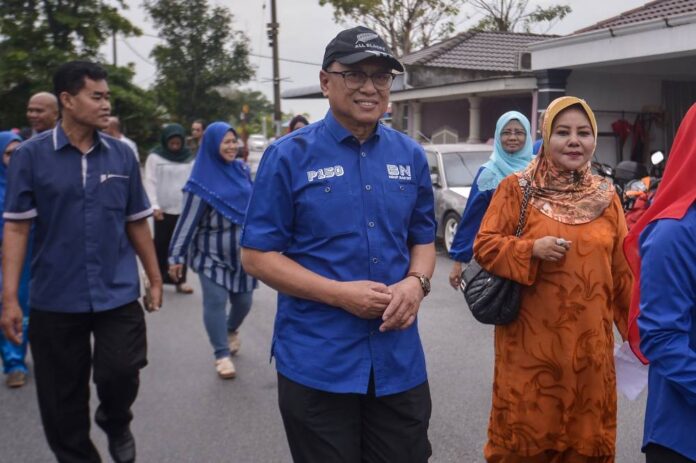 Johor Umno leader Datuk Mohd Puad Zakarshi (centre) says Datuk Seri Tajuddin Abdul Rahman’s claims are irrelevant and he has clearly run out of ammunition to use against his critics. – Picture by Mukhriz Hazim

In a posting on his Facebook last night, the Umno supreme council member and Rengit assemblyman said the Pasir Salak MP’s claims were irrelevant and he had clearly run out of ammunition to use against his critics.

“He just wants to embarrass Umno and is searching haphazardly for a platform,” said Mohd Puad in the post.

Earlier, in his post, Mohd Puad alleged that the reason Tajuddin had signed the statutory declaration (SD) supporting PKR president Datuk Seri Anwar Ibrahim to be prime minister in 2020 was so that the then Pakatan Harapan (PH) government would collapse.

He added that Tajuddin was leveraging on the PH government’s fall to be a minister in the new administration.

“However, up to today, Umno has not changed its position on Anwar following the “No Anwar, No DAP” policy, even though some members might support him.

“Umno will always clash with PKR and DAP in all PRN and PRU,” he said, using the Malay abbreviation for state and general election respectively.

He pointed out that, among others, Tajuddin was seeking a larger allocation, considering that the MoU only benefitted PKR and DAP.

As for Ahmad Zahid meeting Anwar, Mohd Puad explained that it was not unusual for them to do so in their capacity as party leaders.

“They were trying to engage each other for the ‘big tent’.

“However, Umno will still prevail and Barisan Nasional (BN) will stand on its own in the coming elections as the coalition did during the Johor and Melaka state elections,” he said.

On Monday, Tajuddin claimed to be privy to a plot in 2020 to remove Ahmad Zahid as the president of Umno.

He made the allegation in retaliation to the party president’s decision to expel him from the Umno supreme council the previous week.

Tajuddin also said that he, Ahmad Zahid and 13 other Umno MPs had signed SDs affirming support for Anwar to become prime minister at the time.