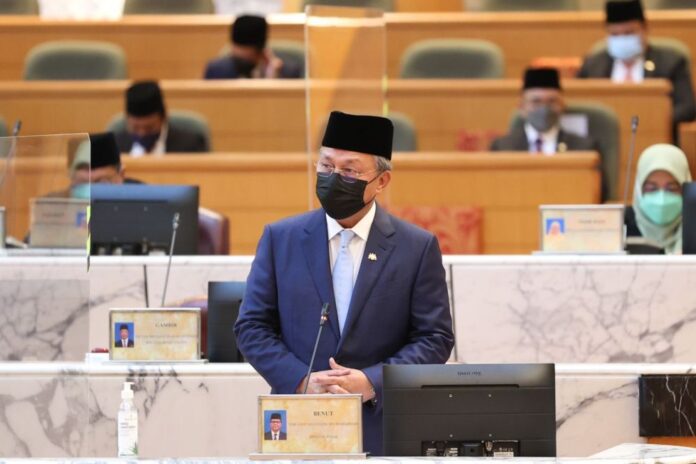 Nur Jazlan believes that the time is right for a new mandate for Hasni and BN as his current administration has proved itself capable of meeting the people’s needs. — Picture courtesy of the Johor Mentri Besar’s Office

JOHOR BARU, Jan 19 — Holding a snap election in Johor would be a necessary move to free the southern state from political uncertainty and bring about stability that will translate to a much-needed economic boost, said a Johor Umno leader.

Datuk Nur Jazlan Mohamed said Johor urgently needs a fresh electoral mandate, as this will allow the state to chart its own progress.

“Coming out of the Covid-19 pandemic, there is an immediate need for Johor, being the second-largest economy among the states in peninsular Malaysia, to fully manage its economic sectors with a focus on boosting the domestic economy as well as incomes of Johoreans.

“For that to happen, Johor needs an experienced MB and administration, one with strong backing and without fear of threats from other coalition partners.

“Only Umno and Barisan Nasional (BN) can offer this, and hopefully, economic progress to all Johoreans in light of the current political situation,” said the Johor Umno deputy chief when contacted by Malay Mail yesterday.

The former deputy federal minister and parliamentarian was commenting on the urgent need for Johor to hold a snap state election at this point in time.

His comments came amid speculation that the Johor state administration led by Johor Mentri Besar Datuk Hasni Mohammad — who is from Umno — may call for snap election by this year ahead of the end of its five-year term next year.

A time for urgent change

Nur Jazlan is of the opinion that Johoreans do not really care about the political games that have led to an unstable government anymore because they know that such change can only come through elections and they decide their fate.

He believes that only Umno and BN can successfully deliver a turnaround for Johor as the coalition is experienced and the state is in the capable hands of its current leader, Hasni.

“In order to achieve this and to fully control the situation, Hasni and Umno must only rely on their own coalition parties within BN in Johor,” said Nur Jazlan, who is also the Pulai Umno division chief.

Nur Jazlan explained that at present, despite BN’s dominance in the state administration, it is still a shared state government with Parti Pribumi Bersatu Malaysia (Bersatu), the lynchpin for the Perikatan Nasional (PN) coalition, and also PAS.

“This has led to a part BN-led government with uneasy coalition partners that have no shared political will, but only issue threats to withdraw their support in an effort to collapse the state government if things do not go their way.

“This is the reason a snap election must be held soon to avoid the state government from being held at ransom by PN, PAS and also the Opposition where their continued support is needed for Umno to rule,” said Nur Jazlan.

He used former prime minister Tan Sri Muhyiddin Yassin’s threat of triggering political instability in Johor “at the push of a button” at the start of the Melaka election campaign period last November as an example.

Johor to call its own shots

As for some national Umno leaders’ opinion that Johor should complete its mandated term and contest the parliament seats at the 15th general election (GE15) due next year, Nur Jazlan disagreed and said an urgent change now would bring about greater benefits for the state.

“It is better to decide now and the next state government will have five years to plan and execute the state’s progress instead of being in limbo with a one-seat majority for another 18 months.

“Who cares what the Umno-led federal government thinks at the moment?

“The conflicted and self-interested parties within Umno there do not seem to care about the country.

“So, forget about them and let us focus on Johor. We can lead the economic recovery and investor confidence on our own,” said Nur Jazlan, hitting out at the Umno factions that are not in favour of a snap election until the current mandate expires next year.

Hasni and BN as state choice

Hasni, who is the Benut assemblyman, was sworn in as Johor’s 18th mentri besar on February 28, 2020.

He is known for his approachable and gentlemanly manner among politicians and public alike.

The 63-year-old seasoned politician and trained engineer was previously the Johor Opposition leader from 2018 to 2020.

Nur Jazlan believes that the time is right for a new mandate for Hasni and BN as his current administration has proved itself capable of meeting the people’s needs.

“Let us look at the past. Bersatu failed with their two MBs after the 2018 general election under the then Pakatan Harapan (PH) state government.

“So, is it a coincidence that the MB from Umno and BN can perform and deliver after the two failures?” he remarked.

At the same time, Nur Jazlan said the Opposition PKR and DAP also do not have a credible mentri besar candidate for Johoreans.

“Having a snap election this time round will not be about politicians and their reckless manoeuvring anymore after we lived through more than three years of political instability.

“It is now about taking action quickly as the next logical step in an effort to fix the situation.

“Hasni is coming to two years as the Johor MB. He is the best choice to lead a politically stable government,” he said.

On Monday, Hasni was reported as saying the need for a Johor state election cannot be ignored completely, but maintained that calling one is not an easy task as the state government has to abide by rules and procedures.

He said there must be a proper justification to hold a state election.

Over the past week, speculation has been rife that Johor may hold a snap state election. The rumours started shortly after the death of Bersatu’s Kempas assemblyman Datuk Osman Sapian on December 21.

His death left the current state government with a one-seat majority in the legislative house.

Hasni currently leads the state government with 28 seats (BN holds 16 seats, Bersatu has 11 and PAS, one), while the Opposition PH coalition controls the remaining 27 seats.