HomeWorldTrump is back -- on the Bidens' Christmas tree
World

Trump is back — on the Bidens’ Christmas tree 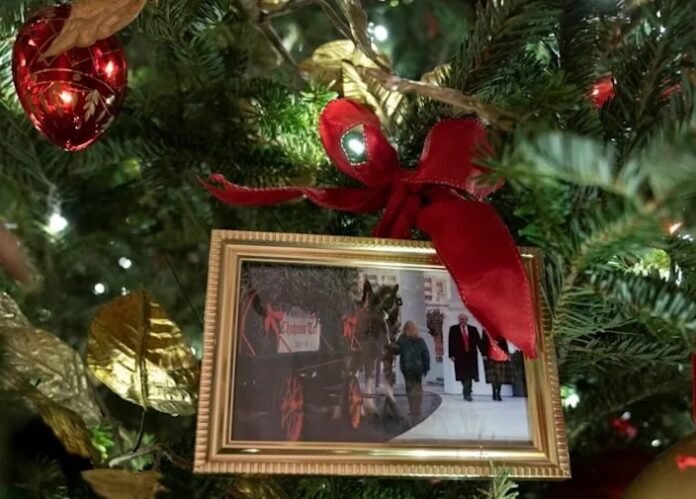 A picture of former US President Donald Trump hangs on a tree in the State Dining room during a press preview of the White House holiday decorations. – AFP photo

Donald Trump has made it back into the White House — at least in the form of a picture hanging on the Bidens’ Christmas tree unveiled Monday.

It’s no exaggeration to say there’s bad blood between the Trumps and Bidens, largely because Trump continues to push his unprecedented attempt to persuade Americans that Joe Biden didn’t really beat him in the 2020 presidential election.

But First Lady Jill Biden’s “Gifts from the Heart” theme for this year’s Christmas decorations is delivering seasonal goodwill.

A gold-framed photo of Trump and his wife Melania hangs on the tree in the State Dining Room, along with snaps of the Obamas, the families of both presidents Bush, the Reagans and the Carters.

Democrats Bill and Hillary Clinton also get a place on the presidential family tree.

More photos of former first families, again including Trump, decorate a hallway. Hanging on another wall are framed holiday greetings cards from Biden, Obama and Trump.

The Christmas truce of sorts contrasts with the bitter relationship between the Trumps and Bidens.

After Biden’s victory, Donald and Melania Trump scratched the longstanding traditional invitation to tea that outgoing presidents and first ladies extend to their replacements.

In another disruption to the more genteel customs of the White House, Trump never hosted his Democratic predecessor Barack Obama for an official portrait unveiling.

The Republican has also yet to have his own portrait hung up in Biden’s White House. – AFP