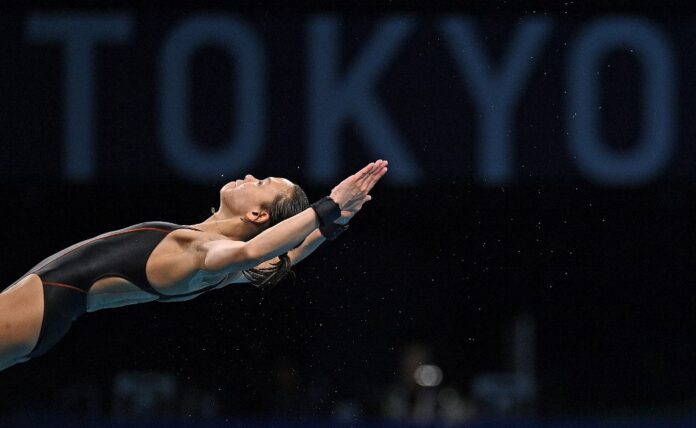 Pandelela competes in the women’s 10m platform diving final event during the Tokyo 2020 Olympic Games at the Tokyo Aquatics Centre in Tokyo on August 5, 2021. – AFP photo

TOKYO (Aug 5): A poorly executed first dive proved costly for national diving ace Pandelela Rinong as her quest for a medal at the 2020 Tokyo Olympics ended with her finishing 12th in the women’s 10-metre (m) platform final here today.

The 28-year-old, who is competing in her fourth consecutive Olympics since making her debut in the 2008 Beijing edition, started with a forward 3½ somersaults but made a big splash in her entry and could only score 18.00 points at the Tokyo Aquatics Centre here.

Her five-dive total of 245.85 points saw her finish last among the 12 finalists and, thus, dash the national diving camp’s hopes of a medal at the Tokyo Olympics.

The national diving camp will now return home empty-handed for the first time since the 2012 London Games.

Pandelela had bagged a bronze in the women’s 10m platform in the London edition before teaming up with Cheong Jun Hoong for the 10m platform synchronised silver at the 2016 Rio Games.

In the Tokyo Games, Pandelela advanced to the semi-finals after finishing 18th in the preliminary round with 284.90 points on Wednesday (Aug 4) while Jun Hoong missed the top-18 cut after finishing 26th with 251.80 points.

Five-time World Championships medallist Pandelela was the last medal hope for the Malaysian diving squad after she and Leong Mun Yee finished last out of eight pairs in the women’s 10m platform synchronised on July 27 and Nur Dhabitah Sabri finished fourth in the women’s 3m springboard event on Sunday (Aug 1).

Pandelela is the first Malaysian woman to win an Olympic medal when she bagged the bronze at the 2012 London Games.

Diving, badminton and cycling are the sports projected to deliver medals for the Malaysian contingent at the Tokyo Olympics but, so far, only shuttlers Aaron Chia-Soh Wooi Yik have delivered – winning a bronze in the men’s doubles on Saturday (Aug 31). – Bernama