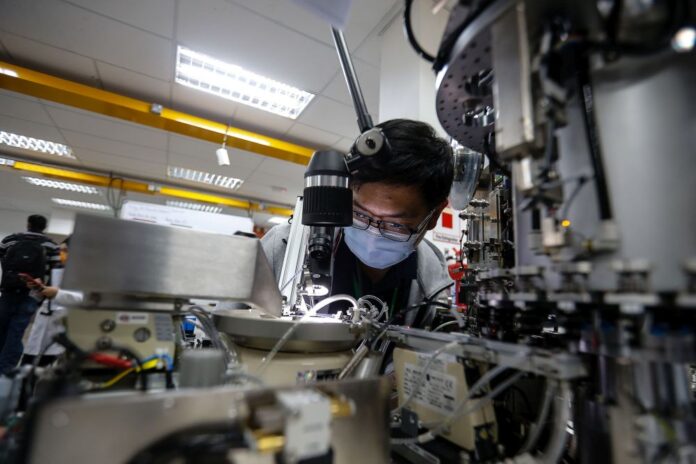 Workers are pictured at their stations at Pentamaster Corporation Bhd in Bayan Lepas July 6, 2021. — Picture by Sayuti Zainudin

KUALA LUMPUR, Oct 14 — The shortage of skilled talents and lack of local research and development in the electrical and electronics (E&E) industry need to be addressed in order to move Malaysia up the value chain, said Datuk Seri Mustapa Mohamed.

The Minister in the Prime Minister’s Department (Economy) said despite its significant contribution towards the economy, the industry faces several challenges in maintaining growth and competitiveness globally following the Covid-19 pandemic.

He said the E&E industry plays a critical role in the country’s industrial development.

“Indeed, Malaysia is a major global manufacturing hub for the industry, producing about 13 per cent of the global back-end semiconductor output.

“E&E accounts for 40 per cent of Malaysian exports. In the first eight months of 2021, Malaysia’s total trade in E&E products amounted to RM477 billion, while exports rose 18.8 per cent to RM282 billion,” he said during a virtual webinar titled “RMK-12: Boosting E&E Industry in Moving up the Value Chain” today.

Under the 12th Malaysia Plan, he noted, the E&E industry is projected to contribute RM120 billion to Gross Domestic Product and RM495 billion to country’s exports by 2025.

“Going forward, the Economic Planning Unit would like to work closely with the Ministry of International Trade and Industry, Malaysian Investment Development Authority and industry in order to realise our ambitious E&E targets,” he added.

He also said the government is committed in creating a more conducive environment for the continued growth of the E&E sector.

It also wants more Malaysian companies, in particular small and medium enterprises (SMEs), to take part in the global value chain, Mustapa said, adding that a number of SMEs have made a name for themselves in the global E&E sector.