HomeEntertainmentThis ros? will bring the heat to your summer drinks game! (VIDEO)
Entertainment

This ros? will bring the heat to your summer drinks game! (VIDEO) 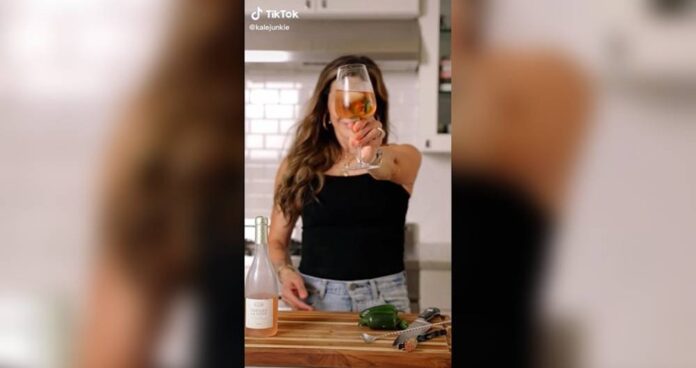 Spicy ros? is the cocktail of summer 2022. — Picture via TikTok/kalejunkie

This ros? will bring the heat to your summer drinks game! PARIS, Aug 5 — Representing 10.5 per cent of the world’s wine consumption, ros? is one of the most striking trends, accounting for 23.6 million hectolitres drank in 2019 compared to 19.6 million in 2002. And while this type of wine doesn’t need a boost to make a mark on drinking habits, it does tend to regularly inspire new recipes, the latest of which was born on TikTok.

In the early 2010s, when ros? consumption experienced a boom, rising from 10.8 per cent of the total volume of wine consumed in 1990 to more than 25 per cent in 2011, people were (already) having fun with the beverage, flavouring the tipple to make it more accessible — or rather, to seduce a new audience. Perhaps you recall the grapefruit-infused ros? trend? With lower prices and alcohol content, this drink was created as a mass-production adaptation of a cocktail that families used to make in the southeast of France, Provence being the country’s top ros? producing region. Ros? was mixed with grapefruit juice to obtain an easy-to-drink cocktail. The beverage has long been lambasted by wine purists who blame this product of mass consumption for hampering ros?’s path to being viewed as respectable a wine type as white or red. And this latest drink trending on TikTok isn’t likely to meet with the approval of this group, particularly since it is rather unusual..

Ros? with a kick

It consists in titillating the taste buds by using a jalapeno pepper, a Mexican variety with a medium level of heat. Each recipe is essentially the same thing: the TikToker fills a glass with ice cubes (another addition that purists will not be pleased about), splash some ros? into it, then in small slices of the jalapeno pepper.

You can control the strength of this cocktail’s heat by removing the seeds and the white membranes which contain capsaicin, the molecule responsible for the spiciness. Like many recipes on TikTok it’s one that can easily be reproduced at home! Its simplicity generates several thousand views on a single post. The video from TikToker @allyssainthekitchen, which is believed to have launched the “spicy ros?” trend, counts more than 500.000 views. Followed by more than 375,000 followers, the influencer, who regularly presents amazing combinations in the form of her homemade cocktails, concocts her recipe directly in the bottle of ros?. And it all started when a follower challenged her by telling her that she wouldn’t dare to add chili to her glass of wine…

And the TikTokers taking part in the trend aren’t only trying it with cheap ros?. Famous TikToker @kalejunkie, for instance, proves she has good taste by choosing a Ch?teau La Coste, an estate located near Aix-en-Provence that manages 200 hectares of vines organically, coming as close as possible to the biodynamic philosophy.

Using ros? as an ingredient in cocktail drinks is actually not so new… The repertoire of concoctions based on this type of wine is quite extensive, whether with a variant of sangria containing cognac or a mixture of ros? and strawberry syrup.

And of course, “froz?” is probably the most fashionable mixture of this type. It consists of putting a bottle of ros? in the freezer. During its freezing time, a syrup is prepared with fresh strawberries. The cocktail is then made with a blender in which you mix crushed ice with the ros? (which will not have completely frozen), the strawberry syrup as well as lemon juice. Which results in a very refreshing kind of slush drink. All to be consumed with moderation of course. — ETX Studio