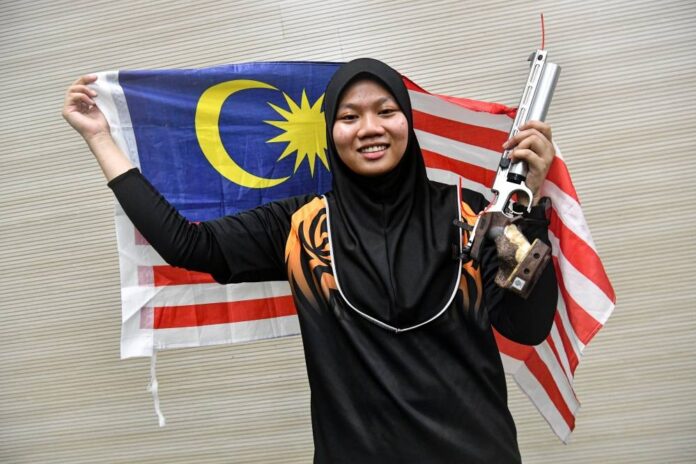 HANOI, May 20 — Despite not being armed with extensive experience, national shooter Nurul Syasya Nadiah Mohd Arifin created a surprise by winning the women’s 10 metre air pistol in her debut appearance for Malaysia’s 35th gold at the SEA Games today.

In final round of action at the Hanoi Sports Training Centre here, the 20-year-old shooter from Batu Pahat in Johor managed to show consistency in each shot to collect 239.3 points, to beat the more experienced field.

Silver was won by Thai shooter Tanyaporn Prucksakorn with 238.7 points while the bronze went to Vietnam’s Thu Vinh Trinh who scored 214.1 points.

It was the 35th gold of the national contingent with three days left before the 31st biennial sporting event draws its curtains to a close.

The success of Syasya, who is the second of four siblings, was the second gold won by the national shooting squad after Johnathan Wong won gold in the men’s 10m air pistol yesterday.

She admitted being jittery and thanked her coach Mohamad Firdaus Abd Rahim for his unceasing support in as early as the qualifying round, which saw her finishing third behind Vin Trinh and Singapore shooter Xiu Hong Teh.

“I am grateful to my coach for helping me from the very beginning until I was able to hold the gold in my own hands.

“I can’t say I harboured high hopes for the gold medal, it was quite difficult because of so many other shooters, so I cried (after winning) because I have proven to my coach that I can do it,” she told reporters.

For the record, Syasya won the 2018 Malaysian Games (Sukma) gold medal when she was 16 years old after only a year of active participation in shooting.

Like other athletes, her progress was also stagnated by the Covid-19 pandemic which saw her only gaining experience on the international stage once at the Indonesian Grand Prix (GP) in Jakarta last February before competing in the SEA Games.

Meanwhile, two other national shooters, Bibiana Pei and Mumtazah Syahiidah Shamsuri, failed to get past the qualifying round. — Bernama