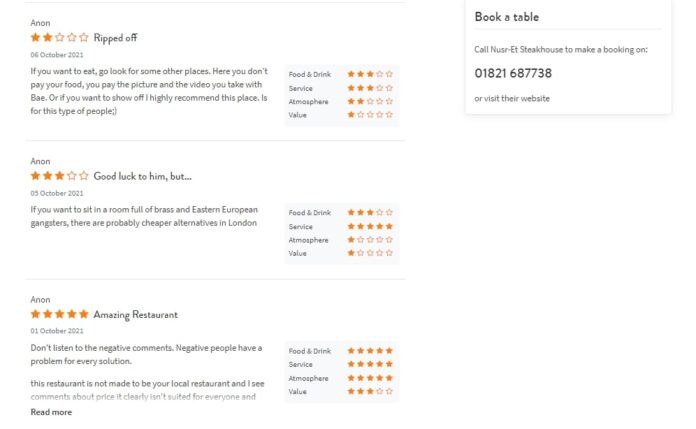 Salt Bae has come under fire by many for his exorbitant food prices. Picture via instagram/nusr_et

PETALING JAYA, Oct 15 — Turkish restaurateur `Salt Bae` has been criticised for removing bad reviews on Google after many complained about the restaurant’s exorbitant food pricing.

Nusret Gokce, nicknamed Salt Bae, went viral over the last few weeks after charging a customer a service charge worth GBP5,000 (RM28,443) at his London Nusr-Et Steakhouse that he launched last month.

Another social media user posted on Twitter saying how a Coke cost GBP9 (RM51) and was charged GBP630 (RM3,585) for a Giant Tomahawk steak.

My London reported that a flurry of bad reviews were deleted while Google reviews currently shows a 4.6 star rating with 30 good reviews altogether.

Google reviews show that most customers had praises for the Salt Bae’s restaurant. Screengrab via Google

It wasn’t so lucky on UK’s restaurant review and booking website and smartphone app, Squaremeal.

There were social media users who slammed the restaurant for overcharging their meals. Screengrab via Squaremeal.

“The prices here are just fraudulent.

“The Gold Burger for GBP100 (RM570) was super dry and was totally average,” wrote a user who only gave the restaurant a one-star rating.

Another user suggested that to find another place to eat as the hefty price for just taking a photo with the celebrity chef.