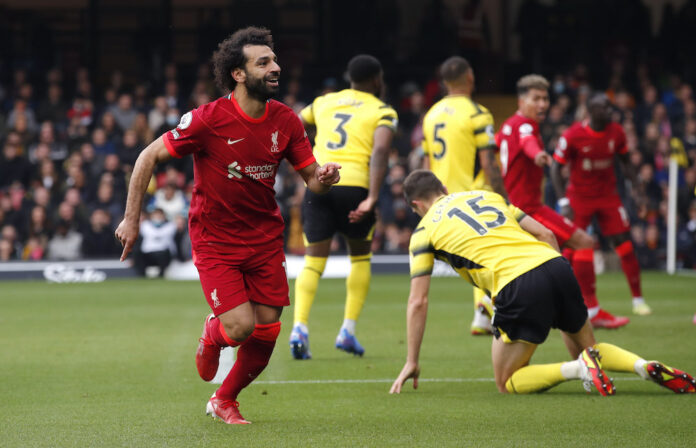 WATFORD, Oct 16 – Jurgen Klopp hailed Mohamed Salah as the best player in the world after the Liverpool forward scored another sublime goal in today’s 5-0 demolition of Watford.

Salah underlined why Liverpool are so desperate to get the Egypt forward to sign a new contract with his audacious second-half strike at Vicarage Road.

Dancing through the Watford defence, Salah’s magical moment topped even his eye-catching goal against Manchester City before the international break.

Liverpool’s habit of avoiding big contracts for players over 30 has fuelled fears the 29-year-old will leave when his present deal expires in 2023.

But with 10 goals in 10 games this season, Salah has proved his huge value to Liverpool, who will surely bow to his wish to be paid alongside the Premier League’s highest earners.

For the first time in his career, Salah has scored in eight successive top-flight matches and Liverpool boss Klopp has no doubts he is now better than even Lionel Messi and Cristiano Ronaldo.

“We don’t have to talk about what Ronaldo and Messi did for world football and how they were really dominant,” Klopp said.

“But in this moment it is clear that there is no one better than him. It was a super pass for the first goal and his goal was absolutely exceptional.

“He’s in the mood to try things in the box and long may it continue.”

Salah’s breathtaking goal stole the spotlight on a day when Roberto Firmino claimed his first Liverpool hat-trick since 2018 in his first start for five league games.

It was also a memorable afternoon for Senegal forward Sadio Mane, who became only the third African player after Salah and Didier Drogba to reach a century of Premier League goals, a milestone encompassing his time at Southampton.

The Reds are the first English top-flight side to score three or more goals in seven consecutive away games in all competitions.

Liverpool, unbeaten in eight league matches this season, moved above Chelsea to the top of the table, although the Blues can reclaim pole position if they beat Brentford later on Saturday.

Watford manager Claudio Ranieri could not have asked for a tougher start to his reign after he replaced the sacked Xisco Munoz.

The Italian, back in the Premier League after his title-winning spell with Leicester and stints at Chelsea and Fulham, will hope this dismal display was not a sign of things to come.

“We conceded too many presents to a fantastic Liverpool team and they don’t need this,” Ranieri said.

“I knew when I came here I had to work hard. But I’m sure we can improve. We have to.”

Liverpool held over 80 per cent of the possession in the first half and took the lead in the ninth minute.

Salah nudged Danny Rose aside with ease and unfurled a glorious pass with the outside of his boot that evaded the entire Watford defence as it arrowed towards Mane, who applied the finishing touch with a first-time shot into the bottom corner.

It was almost too easy for Liverpool and Firmino was the next beneficiary of the visitors’ supremacy in the 37th minute.

A superb move cut through the Watford defence as Mane’s deft pass found James Milner’s overlapping run and his cross was perfectly weighted for Firmino to tap in his fourth goal this season.

Salah was in an offside position when Andrew Robertson crossed, but Craig Cathcart’s sliding intervention deflected the ball to Firmino, who finished from close range.

If that was a no-frills strike, Salah’s 54th-minute goal will be remembered for years to come.

Collecting Firmino’s pass in the Watford area, Salah swivelled away from three defenders with an audacious ball-roll, then left Cathcart on his backside before guiding a superb finish into the far corner.

Firmino completed the demolition with a simple finish from Neco Williams’ cross in the final seconds. – AFP