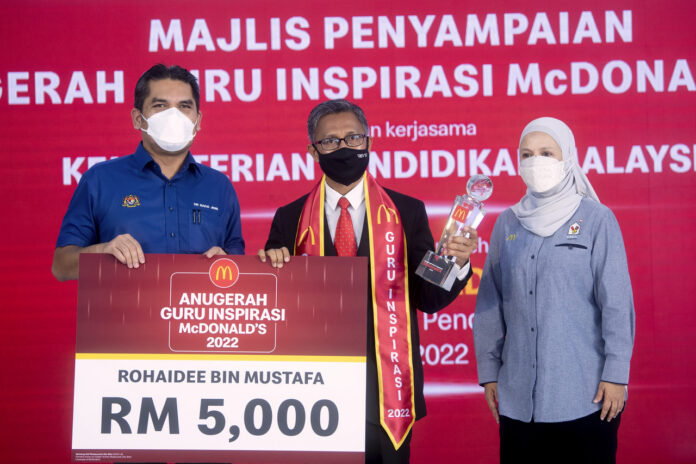 BACHOK, May 14 — Teacher Rohaidee Mustafa credits the ‘Petak Ajaib’ formula, which he first introduced for the Science subject in 2002, as a major factor to becoming one of the 25 recipients of the 2022 McDonald’s Inspiring Teachers Award, held in partnership with the Education Ministry.

The 55-year-old Melakan did not expect his life’s principle of educating other people’s children like his own to have such a profound impact that led to such great numbers of students achieving excellent results in the Science subject.

“When I started teaching in Sekolah Kebangsaan (SK) Bukit Beruang in 2001, I was assigned to teach the Science subject to the last Year 6 class and I found that pupils had a hard time answering the Science (Part B) exam paper, which contained subjective questions.

“Based on observation and monitoring, I found a solution to overcome the issue and created a formula to solve the questions easily based on a technique named the ‘Petak Ajaib’ formula that led to several students scoring Grade A after they mastered the technique,” he told reporters at the 2022 McDonald’s Inspiring Teacher Award ceremony at Universiti Malaysia Kelantan (UMK) here today.

Rohaidee, who is currently the Senior Assistant (Student Affairs) at SK Tun Syed Ahmad Shahabudin in Melaka, said 45 of his pupils of the same school (SK Bukit Beruang) scored Grade A in Science in their Primary School Assessment Test (UPSR) in 2007, thanks to his formula.

“After applying the Petak Ajaib forumla, UPSR results for Science were good and I will continue collaborating and sharing by giving tuition and guidance to parents and teachers from other schools interested in using the formula,” he said.

Meanwhile, fellow recipient, Mohammad Noor Azlan Idris, who is more fondly referred to as Ustaz Abah, a teacher from Sekolah Menengah Kebangsaan (SMK) Syed Abu Bakar in Baling, Kedah, said his success today was thanks to the continuous effort and knowledge he poured into his students.

“Although I teach Islamic religious studies, I would always create a very fun learning environment to attract students’ attention towards the teaching and learning session.

“I have also developed the first-ever tahfiz learning centre in a school’s resource centre in Malaysia through the Hafizul Quran Academy (ALHAQ) programme in this school (SMK Syed Abu Bakar), which received several other accolades,” he said.

Radzi said in his speech that based on the efforts of the 25 teachers being honoured, all had tried to ensure that schools were fun spaces.

“That is among the main elements of Sekolahku Sejahtera. This approach is needed because we want to see our children get up in the morning and go to school without being forced because they feel that schools are fun places.