HomeTechnologyRobot tractors may be heading to a farm near you
Technology

Robot tractors may be heading to a farm near you 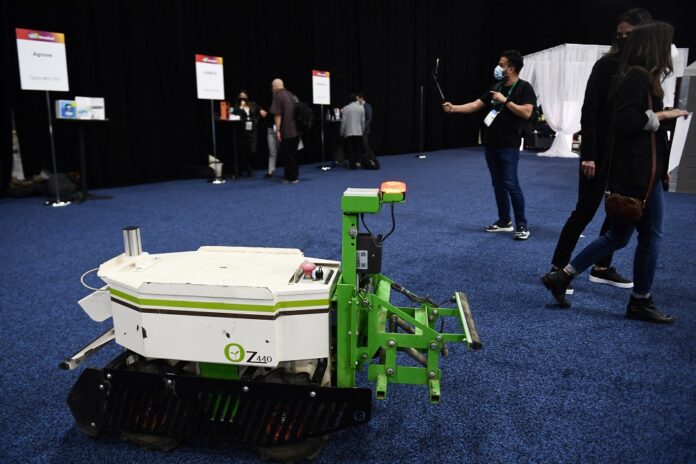 The Naio Technologies OZ440 autonomous agriculture robot for farming is demonstrated during CES Unveiled ahead of the Consumer Electronics Show. — AFP pic

Touted as a means to feed the world, John Deere combined its popular 8R tractor, a plow, GPS and 360-degree cameras to create a machine a farmer can control from a smartphone.

Once the tractor is driven into the field, the farmer can simply swipe right to send it on its way, with no need to be in the cab.

Equipped with six pairs of cameras and artificial intelligence capabilities, the equipment constantly checks its position to the inch, and stops automatically as soon as it perceives an obstacle and sends a warning signal.

Other versions to seed or fertilize fields will come later, but combines to harvest crops are more complicated. The company has not yet specified the price for the equipment.

Technology is not new to the agriculture industry. For nearly 20 years, farmers have used GPS to aid steering, allowing them to plow straighter than a human.

“The customers are probably more ready for autonomy in agriculture than just about anywhere else because they’ve been exposed to really sophisticated and high levels of automation for a very long time,” Hindman said.

Other major farm equipment manufacturers are working on similar tractors.

American company New Holland presented a concept machine in 2016, while Japan’s Kubota in 2020 unveiled a prototype that even eliminates the cab.

And they realized that robots, guided by centimetre-accurate GPS, could limit the use of chemicals.

At the Las Vegas tech show, they introduced the American market to Ted, a robot that can step over vines to weed around plants, and turn around on its own at the end of a row.

They also have a little “farm assistant” called Oz that can hoe, weed, or furrow, as well as a dedicated row crop weeding robot, Dino.

All are equipped with sensors, lasers, cameras or probes, allowing the robot to understand its environment, as well as collect data useful to the operator.

Farmers “no longer consider us as a gadget for the future,” Severac told AFP.

He said it’s likely the use of autonomous machines will first gain ground in specialized crops, with very high added value and requiring the most work, such as vegetables or vines, before moving to large cereal crops.

Artificial intelligence, machine learning, drones and even satellites all contribute to the move towards automating farm work, and the agricultural sector accounts for a quarter of the revenues of satellite imagery company Planet Labs.

“You can see the chlorophyll content in the sensors that we use that take pictures,” company co-founder Robbie Schingler told AFP. That allows a farmer to determine the health of a crop and possibly to add water or fertilizers.

Barrett Hill, 36, a poultry farmer in Illinois, is not surprised by the array of new technologies.

“Adding computers and stuff like that make the whole operation more efficient,” he said, pointing to centralized management of ventilation in his henhouses or a system that avoids planting twice in the same place.

However, he is not sure driverless tractors are right for his family farm.

“I’m sure that’s really expensive. And I kind of want to be out there doing it,” he said. — AFP