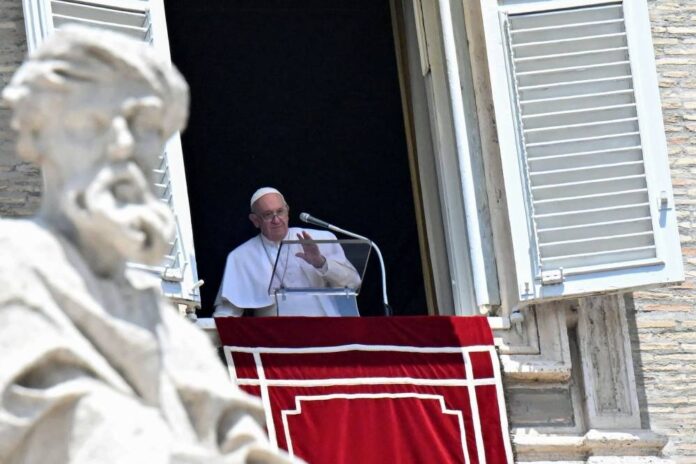 Pope Francis salutes the audience during his Angelus prayer from a window of The Apostolic Palace overlooking St. Peter’s Square at The Vatican on June 26, 2022. – Reuters pic

ROME, July 2 – Pope Francis has said he is “greatly disappointed” he cannot make a planned visit to the Democratic Republic of Congo and South Sudan on Saturday due to knee pain.

The 85-year-old pontiff suffers chronic arthritis in his knee, according to Vatican sources, and has cancelled a string of events in recent months.

“The Lord knows how greatly disappointed I am to have had to postpone this long-awaited and much-desired visit,” the pope said in a video message released by the Vatican on Saturday. “But we remain confident and hopeful that we shall be able to meet as soon as possible.”

The Vatican had postponed the pope’s trip to South Sudan and the DRC on June 10 “at the request of his doctors” to avoid jeopardising treatment.

In his video message, the pope offered a “heartfelt blessing” to the two countries he was set to visit.

He said: “I think of the Democratic Republic of Congo and the exploitation, violence and insecurity from which it suffers, particularly in the east of the country, where armed conflicts continue to cause much intense suffering, aggravated by the indifference and the convenience of many.”

“I think of South Sudan and the plea for peace arising from its people who, weary of violence and poverty, await concrete results from the process of national reconciliation.”

“Dear Congolese and South Sudanese friends, at this time words are insufficient to convey to you my closeness and the affection that I feel for you,” he added.

The pope – who has needed a wheelchair at official events v has also spoken of an injured ligament and suffers from hip pain which forces him to limp. Last July, he spent 10 days in hospital after undergoing colon surgery.

A scheduled trip to Lebanon in June was also postponed due to health reasons, according to the Lebanese government v although the Vatican had never confirmed the visit.

But a trip to Canada at the end of July is still on the pontiff’s schedule. – AFP