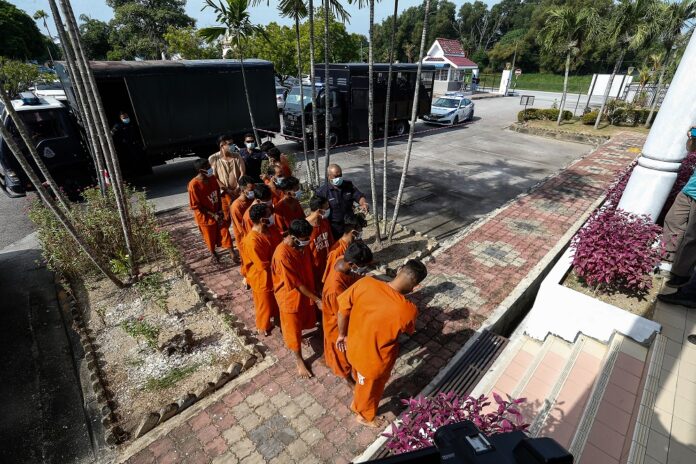 A group of men are led to the Bukit Mertajam Court to be remanded after a video clip of them performing Aidiladha prayers outside the Taman Pelangi Surau in Juru went viral on social media July 21, 2021. — Picture by Sayuti Zainudin

GEORGE TOWN, July 22 — The Taman Pelangi surau committee had observed the rules for Aidiladha prayers on July 20 and the gathering outside its premises was beyond their control, Penang Deputy Chief Minister I Datuk Ahmad Zakiyuddin Abdul Rahman said.

He said the committee and the Central Seberang Perai Religious Administration Officer have given him a full report on the incident for which 49 men were remanded by the police for flouting standard operating procedures (SOPs) on that day.

“After scrutinising the chronology of the case, the surau committee has complied with the SOPs where only 100 people, consisting of locals and permanent residents, who have taken at least one dose of Covid-19 vaccine are allowed to join in the Aidiladha prayers that day,” he said in a statement today.

He said the surau committee chairman was reminded twice on the SOPs and the emphasis was not to allow foreigners to join in the prayers on that day.

However, he said some foreigners refused to comply and decided to join the prayers outside the surau compound.

“This was clearly out of the control of the surau committee as they had locked the surau gates and refused entry to anyone just before the prayers started,” he said.

He thanked the police for their followup enforcement action in identifying those who refused to comply with the SOPs as this is in line with the state’s stance to ensure strict adherence to SOPs.

He said the public also shared images of the individuals involved being handcuffed while not wearing shoes.

“I hope the police will use their own discretion in handling this issue,” he said.

He hoped the incident will be a reminder to all, especially to mosque and surau committees in Penang, to be serious in ensuring they adhere to the SOPs at all times.

Yesterday, the magistrate’s court allowed a four-day remand against 48 Bangladeshi men and a three-day remand against a 64-year-old Malaysian man to facilitate investigations into a mass prayer session outside the Taman Pelangi surau during Hari Raya Aidiladha.

It was reported that the men were detained at various locations in Juru on Tuesday after a video showing more than 200 Muslims, believed to be mostly foreigners, praying outside the surau.

The police is investigating the case under Section 269 of the Penal Code for negligent acts that could spread an infectious disease as well as movement without permission, Section 270 of the Penal Code for spreading harmful infections and the Prevention and Control of Infectious Diseases Act 1988 (Act 342) (Measures in Communicable Areas) Regulations 2020.